REVEALED: ‘N700m for construction of hand of God’, ‘N680m for ministry of happiness office’ … details of Okorocha’s N20bn contracts 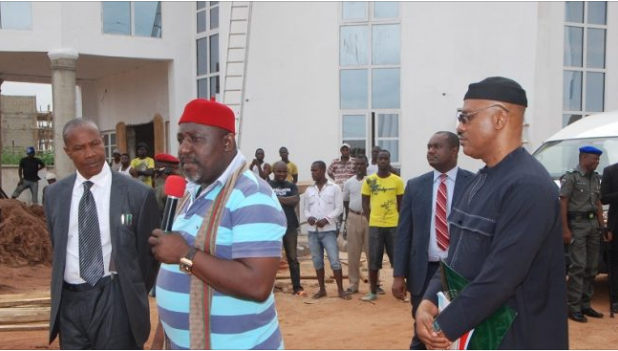 Documents obtained showed that the contracts were awarded to this company in violation of the public procurement act.

TheCable reports that in 2010, the administration of Ikedi Ohakim, a former governor, modelled the procurement act of the state after that of the federal government.

The act says to bid for contracts, a company needs to present three years tax clearance, audited accounts, evidence of work experience as the main contractor executing or having executed a minimum of four (4) projects of similar complexity, evidence of possession of relevant machinery and equipment and scanned copies of certificates of technical/professional staff of the company. 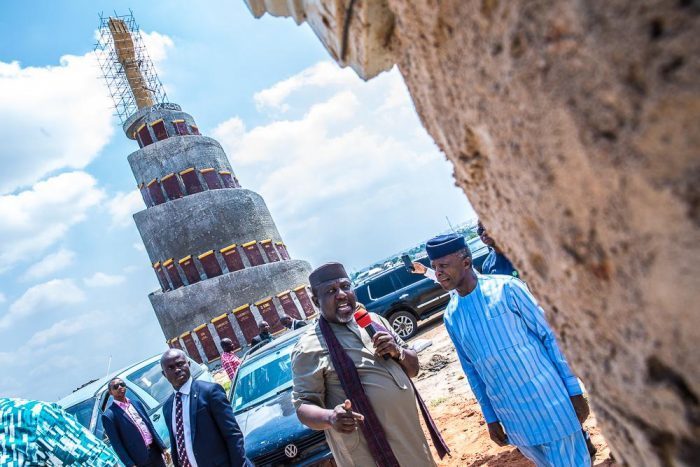 Okorocha and Vice-President Yemi Osinbajo at the site where ‘Akachi’ tower was constructed.But  Zigreat International Company Limited, which had no functional website as of the time this report was filed, got its first contract from Okorocha’s government three months after it registered at the Corporate Affairs Commission (CAC). The former government in Imo had awarded a N700 million contract to it for the construction of a tower.

All the contracts awarded by Okorocha’s government were signed by Paschal Obi, then principal secretary to the governor. Obi is now the member representing Ideato north and Ideato south in the house of representatives. 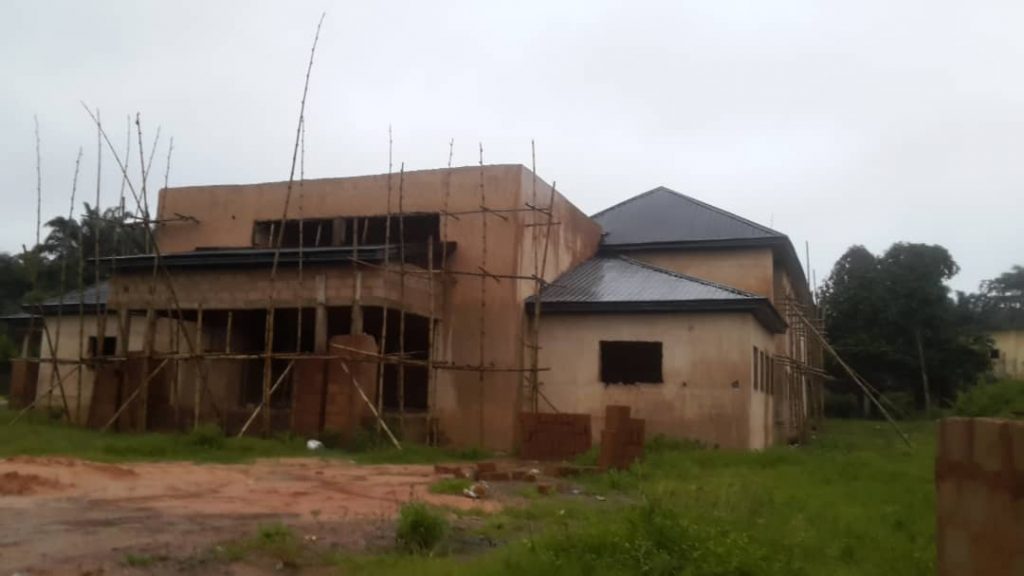 N683 million was awarded for the construction of this project: Community Hospital, Ogboko. The first contract, construction of “Akachi”, an Igbo term which translates as “The Hand of God”, in Owerri, the state capital, was awarded for N700 million. In a letter dated November 15, 2013, his administration told Zigreat that 25 percent of N700 million would be made available as mobilisation fee.

“I am directed to refer to your quotation of the above contract and to convey His Excellency’s approval that your company Zigreat Intl. Coy. Ltd. undertakes the contract for the Construction of Akachi (Hand of God) at a total contract sum of #700,000,000.00 (Seven Hundred Million Naira) Only,” the letter read.

“In line with Government Policy on contracts, you are requested to indicate acceptance in writing without delay. You should report to the Principal Secretary to the Governor, Government House, Owerri for details and signing of Contract Agreement, please.”

The ex-governor also approved N683 million for the construction of Community Health Hospital in Ogboko, his hometown in Ideato local government area. Till date, the hospital is in a derelict state.


Below are the details of other contracts awarded between 2016 and 2017:


Some of the contracts were not completed before the end of the former governor’s tenure in 2019.

He said with over 1000 projects, Okorocha, whom he described as a hero, should be honoured.

“Okorocha has more than 1000 projects in the state, even if trillions of naira were spent on those project, that’s justifiable because the man has worked. The most important thing is whether the contracts were executed or not, if you are a contractor and I know you can give me what I want without running away with my money, I will give you the contract,” he said.

“The issue should be was the job done? If the job was done, then it’s left for those who are financial experts to know whether the price budgeted for it was commensurate with what was delivered.  You give a job to person that will perform or a company that is not registered. If a company is registered and bid for a job and the job is given, what’s criminal about it?”

Asked if Zigreat International Company Limited has any affiliation with Okorocha, the media aide said: “I’m not in a position to answer that.”

Okorocha, the incumbent senator representing Imo west, is currently under investigation by the Economic and Financial Crimes Commission (EFCC).

Last week, the anti-graft agency seized some properties allegedly traced to him in Imo. They include schools, a hotel, hospital, estate, supermarket and residential buildings. 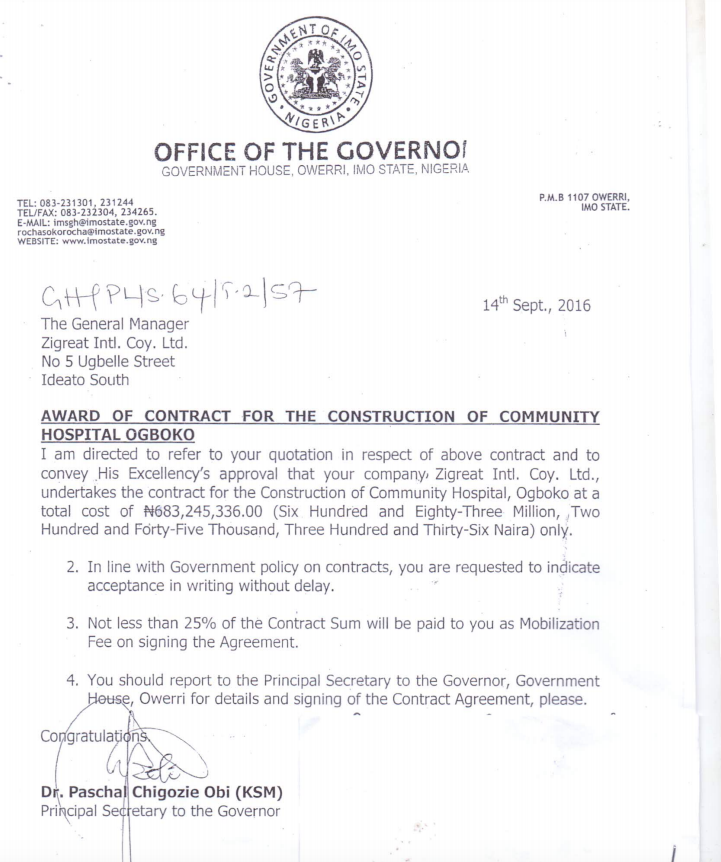 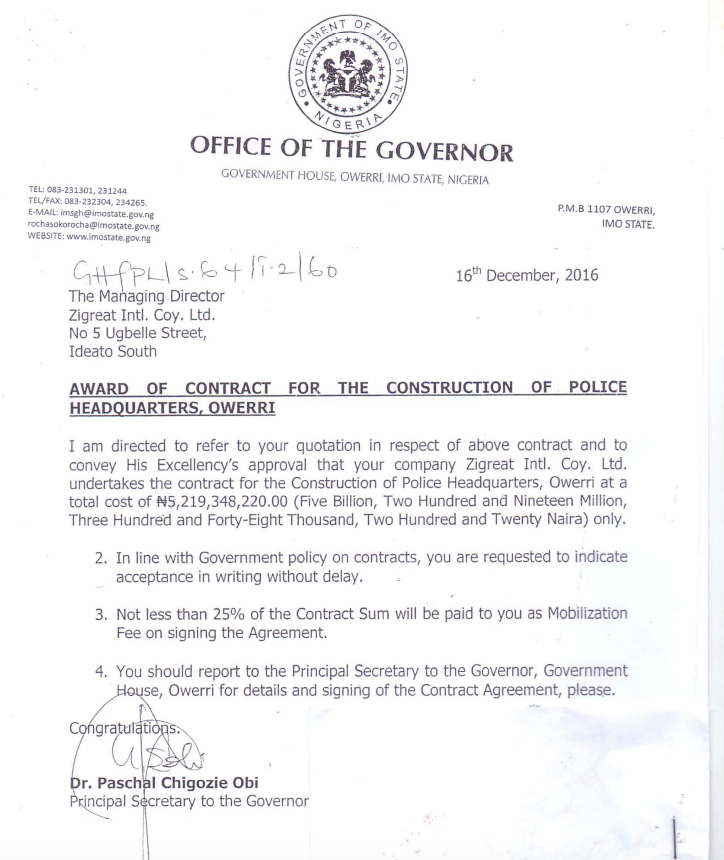 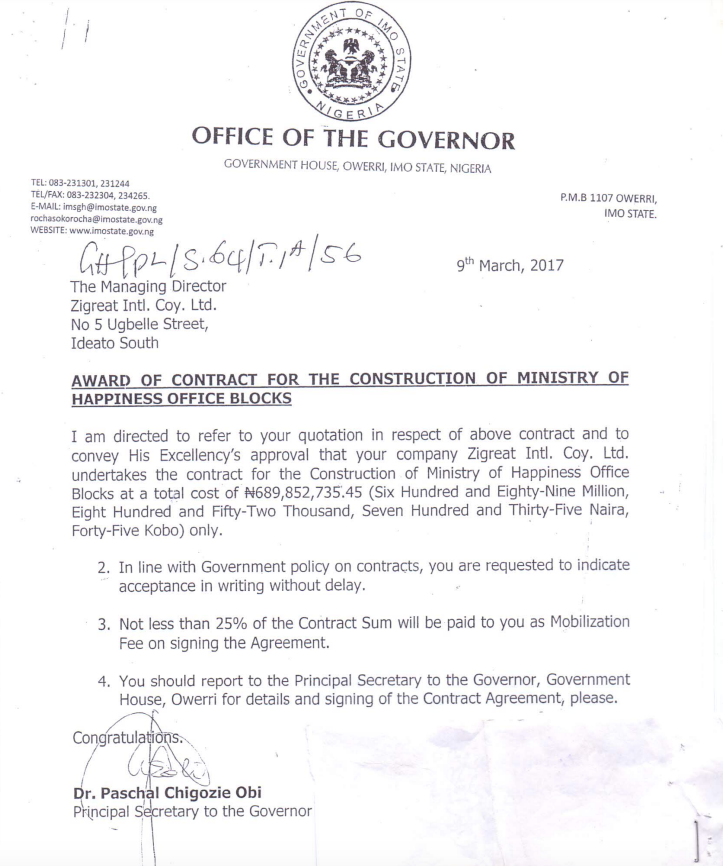 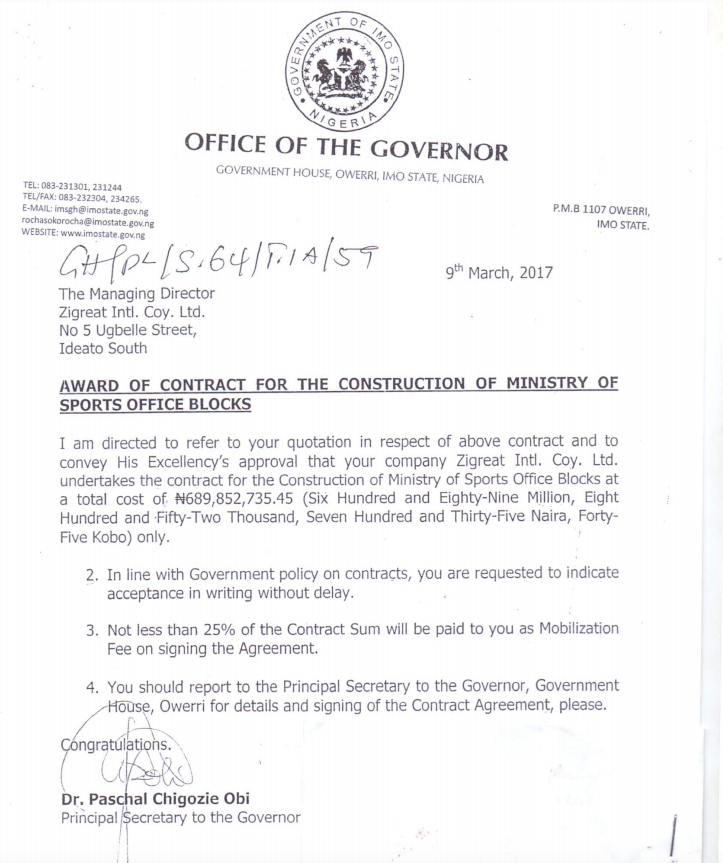 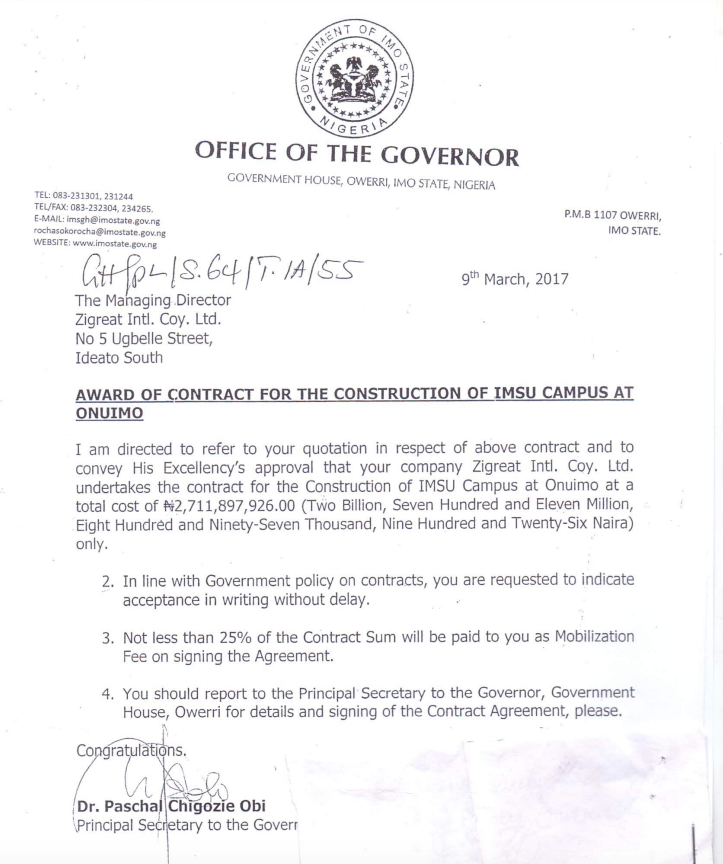 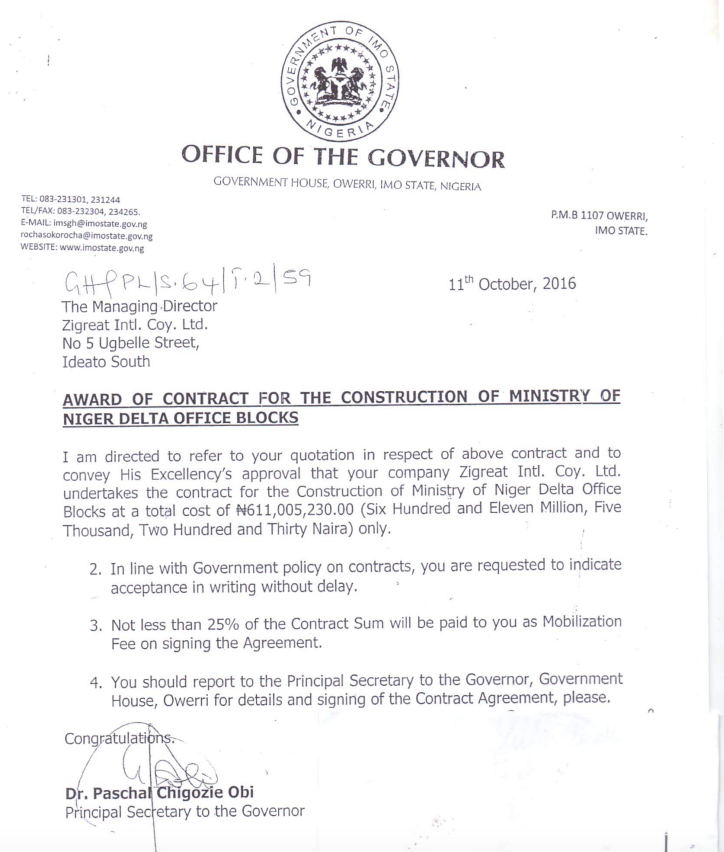 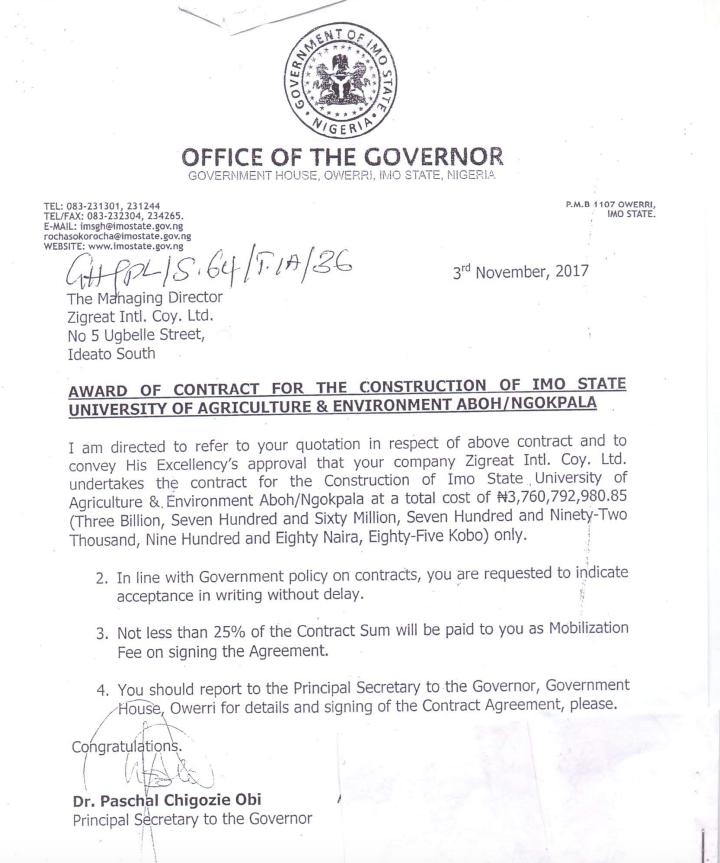 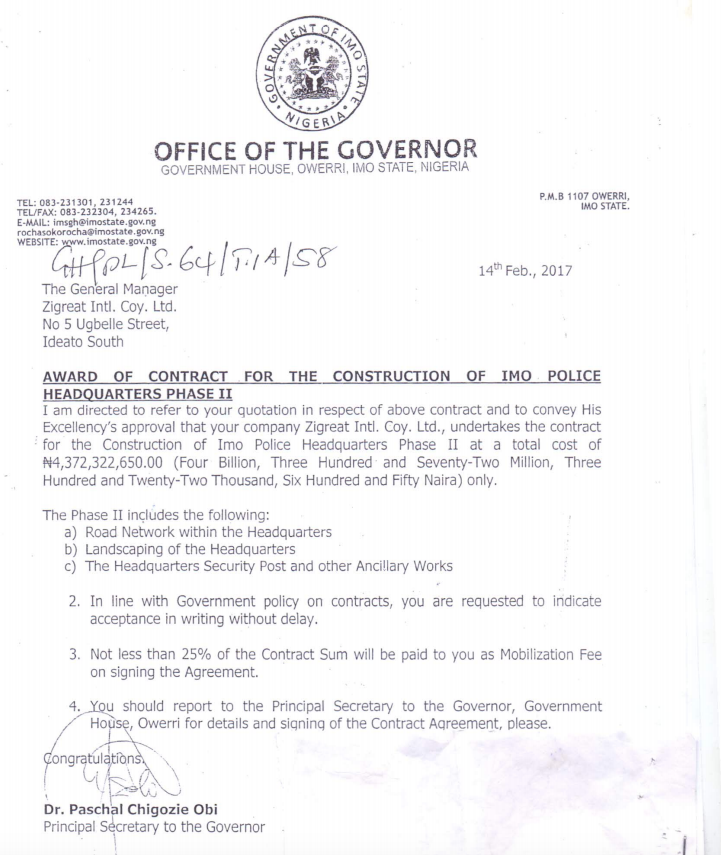 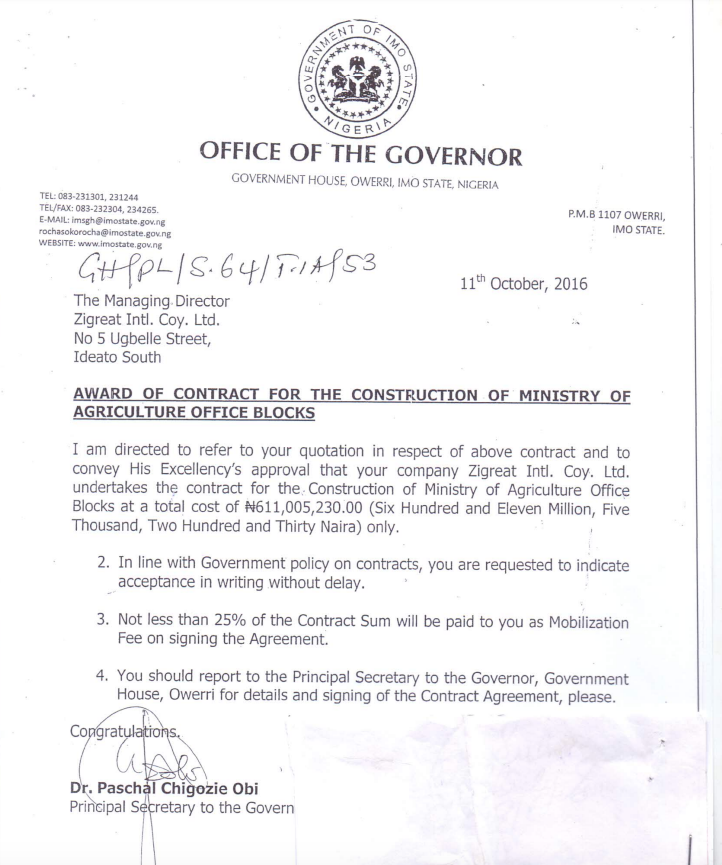 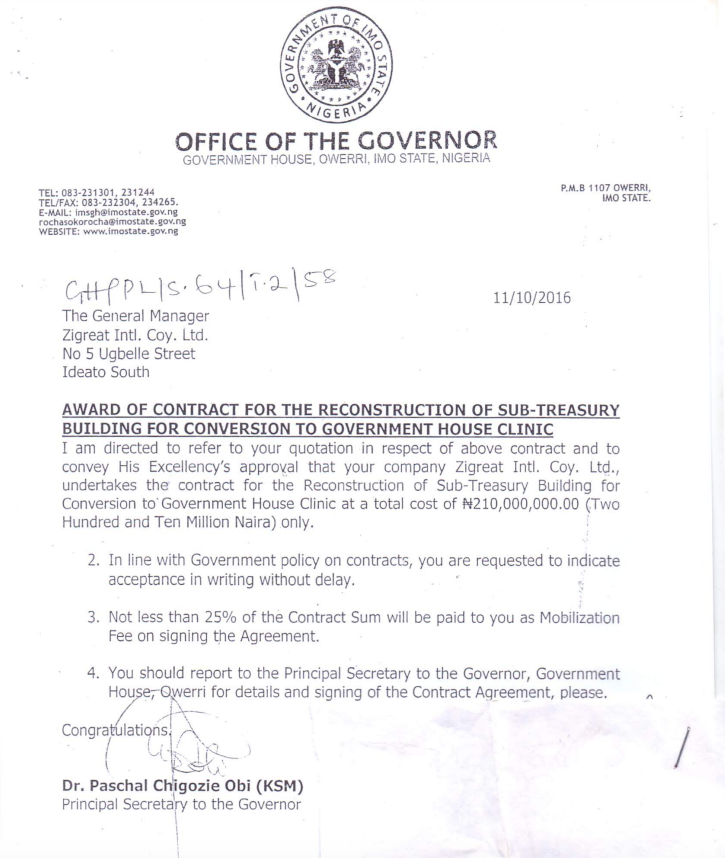 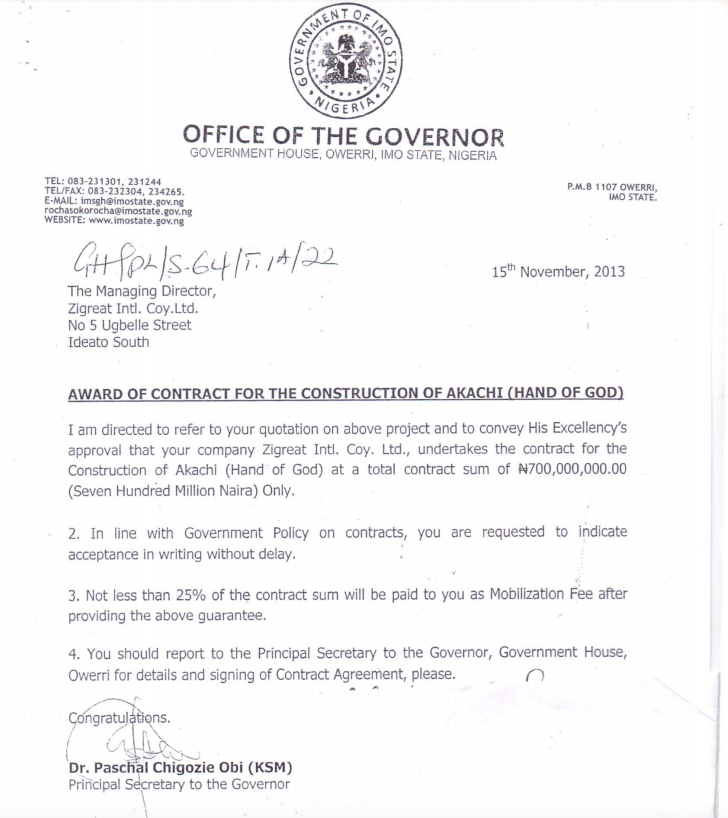