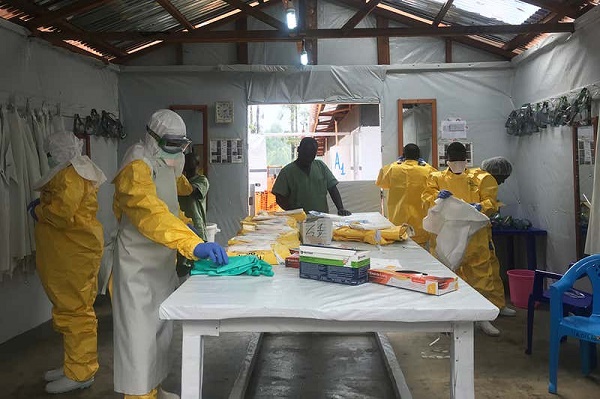 Preliminary results from a new research have shown that two new Ebola drugs are highly effective when it comes to treating people with the virus.

Ebola is a virus that initially causes sudden fever, intense weakness, muscle pain and a sore throat, which could lead to the death of victims from dehydration and multiple organ failure.

Two of four drugs being trialed in the major outbreak in the Democratic Republic of the Congo were found to have significantly reduced the death rate.

More than 90 percent of infected people can survive if treated early with the most effective drugs, the research showed.

The trial, conducted by an international research group coordinated by the World Health Organization (WHO) and co-sponsored by US National Institute of Allergy and Infectious Diseases (NIAID), began in November last year.

REGN-EB3, mAb114, ZMapp and Remdesivir were used on patients during the experiment in the DRC.

The drugs were tested on around 700 patients, with the preliminary results from the first 499 now known.

While REGN-EB3 and mAb114 gave a 90% survival rate by attacking the Ebola virus with antibodies, ZMapp and Remdesivir were found less effective.

The preliminary findings have now been stopped while the two drugs will now be used to treat all patients with the disease in DR Congo.

According to BBC, two people cured of the virus on Tuesday were released from a treatment centre in Goma, eastern DR Congo, and reunited with their families.

Anthony Fauci, director of NIAID, said they are the “first drugs that, in a scientifically sound study, have clearly shown a significant diminution in mortality” for Ebola patients.

“From now on, we will no longer say that Ebola is incurable,” said Jean-Jacques Muyembe, director-general of the Institut National de Recherche Biomédicale in DRC, which has overseen the trial.

“These advances will help save thousands of lives.

“Now that 90% of their patients can go into the treatment centre and come out completely cured, they will start believing it and building trust in the population and community.”

The latest outbreak, which started in August 2018, is the 10th experienced in DR Congo since 1976.

Not less than 1,803 people in the country have been killed by the disease since the latest outbreak, which recently compelled Rwanda, a neighboring country, to close its border in a bid to prevent a spread of the virus.