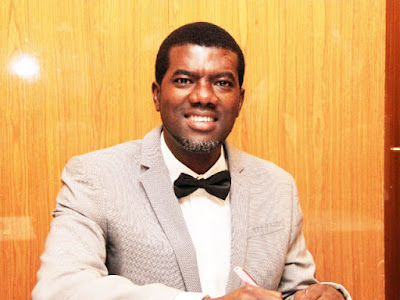 Former media aide and activist, Reno Omokri has taken to social media to mock Wole Soyinka, following the closure of a venue he intended to use for a symposium in Lagos, yesterday.

However, the venue of the event which was around the Oregun area of Lagos was sealed off by members of the Nigeria Police Force. As a result, the press conference could not hold.

In his reaction, Reno, who has been particularly displeased by Wole Soyinka’s negative comments during the Jonathan Administration, hit out at him, insisting that he brought it all on himself.

Reno wrote, “Wole Soyinka co-created the Frankenstein monster that General Buhari has become with his ‘anyone but Jonathan’ mantra. Now Jonathan is OUT of POWER and Soyinka is OUT of FREEDOM and he wants us to come OUT on the streets?  No. Enjoy your monster!

“So disappointed that a Professor, who is also a Nobel Laureate, expected a man of doubtful school certificate to be his messiah. Soyinka is crying dictatorship? Dry your crocodile tears. You produced & directed the nightmare starring General Buhari.

“Soyinka and co removed Jonathan, whose “political ambition is not worth the blood of any Nigerian” and CROWNED Buhari, who threatened that “the dog and baboon will be soaked in blood” and they are surprised when there is blood all over Nigeria?

“Herdsmen who STEAL, KILL and DESTROY, held a meeting in Zamfara to explain why they decided to kill Nigerian citizens, and General Buhari did not shut down the venue.

“But he shuts Soyinka’s venue. Imagine! Anyway, Soyinka’s is reaping what he sowed. Dear Wole Soyinka,  Are you not endorsing again? What happened to your romance with General Buhari ? Have you forgotten ‘anyone but Jonathan’? Have you forgotten when you were campaigning for Buhari? Your tree has matured. Enjoy its bitter fruit!”