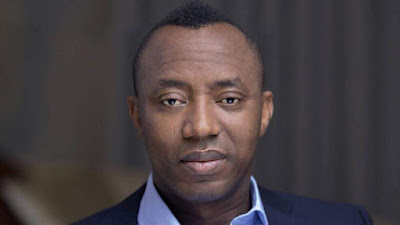 The security personnel comprising soldiers, policemen, as well as operatives of the Department of State Services, Nigerian Security and Civil Defence Corps and Nigerian Prisons Service, stormed the Unity Fountain, Abuja, venue of the protest but the activists defied them and carried on with their demand.

Sowore was arrested by the DSS for mobilising Nigerians to protest against the deteriorating security and economic condition in the country.

Led by Deji Adeyanju, convener, Concerned Nigerians, the campaigners dared the government to imprison all its critics, insisting that they cannot be cowed by the security agencies.

Adeyanju described Sowore, Dadi Yata, Jones Abiri, Steven Kefas and other social and media critics in custody as prisoners of conscience, who he said represented “the uncountable numbers of Nigerians who are victims of maladministration of Buhari’s government in Nigeria.”

He said, “The deployment of all the security agents in the North-East to Abuja will not stop us from demanding Sowore’s release from custody,” the campaigner said.

Another activist, Rapheal Adebayo said that Nigerians were ready to rise against what he called the dictatorial tendencies of the government.