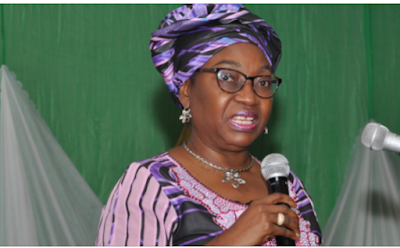 The embattled Head of Civil Service of the Federation, Mrs. Winifred Oyo-Ita, on Wednesday made a surprise appearance at the Presidential Villa, Abuja.

The Presidency is billed to inaugurate new cabinet today.

Oyo-Ita arrived the forecourt of the State House in her official SUV around 9.45am.

She had walked straight to the office of the Chief of Staff, Abba Kyari.

She had been absent at the two-day Presidential Retreat for ministers designate, federal permanent secretaries and top government functionaries held at the old Banquet Hall on Monday and Tuesday.

Oyo-Ita, specifically didn’t show up on Tuesday when she was scheduled to speak on ‘Consolidating Ongoing Reforms in the Public Service’.

But the Presidency had countered by saying that it was yet to receive the resignation letter.

Oyo-Ita was still at the Chief of Staff office at the time of filing this report.