Outrage as popular Instagram comedian, Maraji says 'Jesus is the only way, not Allah' 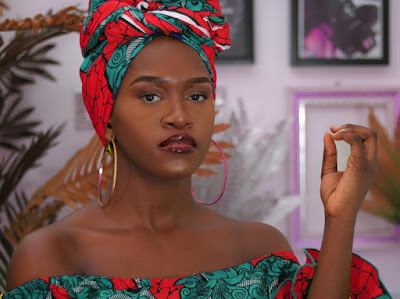 There was outrage across the Nigerian social media space on Monday after popular Instagram comedian, Gloria Oloruntobi popularly known as Maraji posted a message saying Jesus was the only way to heaven and not Allah. 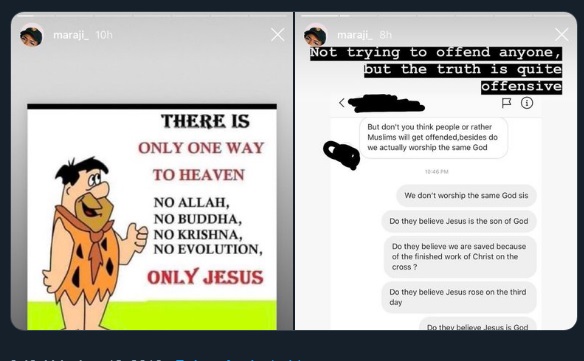 Many Nigerians reacted swiftly to her statement on social media, advising her to thread carefully because of the sensitivity in the matter.

Others also questioned her timing of this statement, at a time when millions of Nigerian Muslims are celebrating Sallah.

Maraji dropped this on Sallah day, clout chasers be doing the most these days. pic.twitter.com/DA7fCZ9A7G
— Ragna Solskaja (@YinkaDerek) August 12, 2019

Dude talk about your God and his awesomeness without mentioning other people's God for God's sake. That's what maraji did. Its wrong.
— I am that dope fella (@demowen) August 12, 2019


You see how many Christians are calling out Maraji?

We should learn to respect people's religion and belief including traditional religion.


I used to be a big fan of Maraji but i'm done. Nigeria as we have grown to know are sensitive to religious matters, we all know Christians love Jesus and see him as their saviour. Why belittle other belief to support yours in public? Where's the wisdom in that?
— Haliru Usman (@Bwari90) August 12, 2019


Maraji wants to start a religious war or what? Allow them celebrate their sallah in peace abeg.
— Veyn (@Whispertogalaxy) August 12, 2019

What people need to understand is that nobody is mad at what Maraji said. Christians say Muslims worship a fake God and vice versa.
The only issue is her timing. You don’t come on their biggest festival of the religious year and bash them. Mba nu. That’s very wrong
— 🥀🇳🇬 (@Ehformah) August 12, 2019

Christians: Jesus Christ is the son of God, you can’t go to heaven if you’re an unbeliever

Muslims: “Allah is the only God and any on that believes otherwise is an infidel”


I do not dispute or contend with Maraji over her post, but one thing I ve learnt is:
Religion is a very sensitive issue in Nigeria
therefore
as much as possible
I stay away from throwing out my opinion into an uncontrolled public space.
We could have One on One conversation pic.twitter.com/ns3TKiunX1
— Comrade 🔴🇳🇬 (@iAGB4REAL) August 12, 2019


Maraji's writeups are very insensitive especially in a religious diverse country like Nigeria. Religious choices are personal. You shouldn't try to get others rattled by disregarding theirs. pic.twitter.com/XEdvycYfgD
— World Publicist (@IsimaOdeh) August 12, 2019

We all have our different opinions about our faith and religious beliefs.

You just don't have to voice it out as a brand, and even if you want to, you must be smart and diplomatic on your choice of words.

Maraji must learn from this mistake, apologize and move on!
— LOLA (@CuteNaija) August 12, 2019

Maraji's timing was beyond stupid but if we're being honest, I mess with Maraji for her easily digestible, simple ass humor I have not one day considered her views or opinions cos... I don't care.
That's not why she exists to me.
So... its whatever really. Lol!
— Prof B'tamuch Rada (B.A. Ho) (@ElJefe__) August 12, 2019