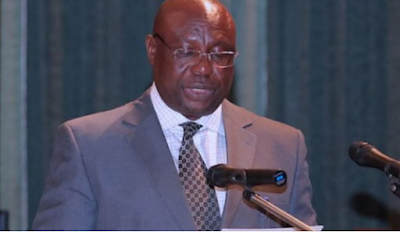 The Independent National Electoral Commission (INEC) says Frankland Briyai, resident electoral commissioner (REC) in Cross River state, remains in office until he resigns formally or is sacked by the president.

Festus Okoye (pictured), chairman of INEC’s information and voter education committee, made this known this on Thursday during the national strategy meeting on capturing disaggregated data of persons with disabilities (PWDs).

Briyai had during a press briefing at the commission’s office in Cross River, announced his resignation and intention to join politics.

INEC opposed the announcement, saying that such political engagements are forbidden.

Speaking at the meeting in Abuja, Okoye said Briyai did not inform the commission of his decision to join a political party but went ahead to “organise a sendoff party for himself”.

“We consider this unacceptable; we have a code of conduct that binds every national commissioner and REC. We cannot be partisan and at the same time be umpires.”

Okoye, however, added that “the truth of the matter is that the commission does not have the power to sack or dismiss any REC because we are not the appointing authority.”

“So what the commission has done is to withdraw the powers donated to him (REC Cross River state) by the commission but he still remains a REC until he resigns properly or until he is removed by the president who is the appointing authority.”

The governorship election in Bayelsa is scheduled to hold in November.