Nwodo to Nnamdi Kanu: I won’t insult Buhari or call Nigeria a zoo 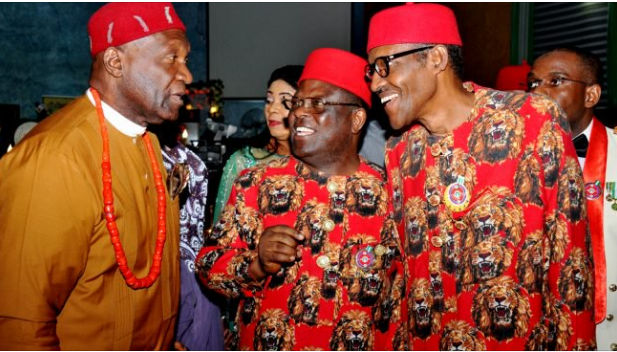 John Nwodo, president-general of Ohanaeze Ndigbo, says he will neither insult President Muhammadu Buhari nor call Nigeria a zoo.

In an open letter to Ndigbo, Nwodo denied the allegations labelled against him by Nnamdi Kanu, leader of the Indigenous People of Biafra (IPOB).

He said Kanu’s latest “unprintable lies about me” prompted him to address the accusations “because, not to do so will make them credible amongst those who may not have heard my side of the story”.

The Igbo leader said Kanu accused him of being a Fulani stooge.

Nwodo said everything he had done proves his activism is in the interest of Ndigbo, adding that he had no role in the invasion of Kanu’s residence in 2017.

He accused Kanu of making threats to his life and that of his family and also inciting IPOB members against him.

“Nnamdi accuses me of being a Fulani stooge!! I am sure no reasonable Igbo man believes him.  I have criticized President Muhammed Buhari more than any other Nigerian.  Perhaps, what I don’t do is to insult his person or call Nigeria a zoo.  I was trained to be respectful.  I can disagree with you without being rude and impertinent,” Nwodo said.

“No matter how sectional, incompetent or unproductive I consider the President of Nigeria to be, I must respect his age and office in my criticisms of him.  As for the attack on my late father, I forgive Nnamdi. My father was Zik’s Minister and Okpara’s Minister.  My father and late Chief M.N Ugochukwu were some of the prominent financiers of the Biafran War.  I fought the Biafran War myself as a Biafran soldier at a very young age without my parents objecting.

“Yes, I served President Shehu Shagari and General Abdulsalami Abubakar as minister.  I respect them notwithstanding differences of opinion we may have on the structure of Nigeria.

“Odumegwu Ojukwu was like my senior brother.  Bianca can attest to our closeness and my loyalty to him.  Vice President Alex Ekwueme was my mentor and friend.  Nnamdi Azikiwe confided in me and treated me like a son.  M.I. Okpara was the Chairman of my wedding.  Late Dr. Dozie Ikedife was the first person to sign my nomination form for the office of President General of Ohanaeze.  None of these Igbo leaders found me a traitor of Igbo cause.  Every-where I have been in Igboland, young men and women embrace me, pose for photographs with me and commend my efforts in championing our case.  I salute them all.

“Notwithstanding these abundant evidence of my championing IPOB cause, he ordered an invasion of my telephone with numerous insulting calls and threats to my life.  My home in Ukehe was bombed.  Police investigations of these incidences linked some of them to IPOB members.  Their lawyers approached me and I thought that a father taking his son to court and subsequently to jail would be un-Igbo.  Notwithstanding their confessional statements, I withdrew my compliant against them and they pledged to be of good behavior.

“I have noted the threats to my life from the IPOB leader.  I leave that to God and the law.”

Nwodo said despite Kanu’s attack on him, he appreciates his (Kanu’s) upholding of the Igbo cause.

“In spite of all I say, I salute Nnamdi for his courage and his persistence in upholding our case but I urge you all to rise up and condemn what is condemnable.  Speak up and shame those who would want us to split into pieces and destroy our resolve to fight as a united people,” he said.

“As a father, I will always forgive an erring child but not without drawing his attention to a misdemeanor which should never be repeated.”

Nwodo had criticised IPOB over the attack on Ike Ekweremadu, former deputy senate president, in Germany on Saturday.