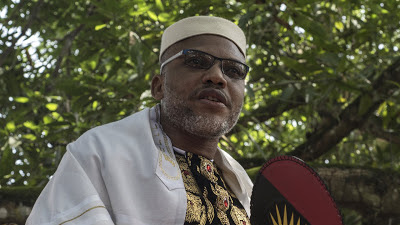 The proscribed Indigenous People of Biafra (IPOB) has pledged N1 million reward for information on the foreign travel plans of all the governors in the South East region and the chief of army staff, Lt. General Tukur Buratai.

The leader of the separatist group, Mazi Nnamdi Kanu, announced the reward in a broadcast to members of his movement.

The announcement meant the group has decided to escalate the attack against political leaders in the south east, following the shameful one on Senator Ike Ekweremadu, former deputy senate president in Nuremberg, Germany on Saturday.

The attack has been roundly condemned by the Nigerian government and Igbo leaders.


“Anyone who will provide any reliable information about any country that any of our corrupt politicians will be travelling to will be awarded One Million Naira. Give IPOB accurate information on their whereabouts and collect One Million Naira (N1, 000, 000). E.g People Like David Umahi, Okezie Ikpeazu, Nnia Nwodo, Buratai, Willie Obiano And Many Others”, Kanu announced.

The fugitive Kanu on Saturday praised the attack against Ekweremadu and in a statement on Sunday, the spokesman of the group, Emma Powerful, said the attack was the beginning of a ‘revolution’ by the group, craving for the break-up of the south east region, from Nigeria.

In the broadcast monitored by his followers, Kanu also warned South East governors over the military exercise slated to begin tomorrow, saying that his group will go after any governor of a state, where any IPOB member is killed. He also extended the threat to the governor’s children staying abroad.

“They Are About To Start Another Operation Python Dance III Exercise Tomorrow In Biafra land. I’m Sounding This Warning, If Any IPOB Is Killed Again In Any South-East State, We Will Come After The Children Of The Governor In The State Any IPOB Member Is Killed. We Will Go After Your Children, Because We Know Where They Are In Europe And Abroad”.

The fugitive Biafran leader also warned Yoruba and Hausa Fulani leaders for condemning the attack on Ekweremadu, which he called ‘a family matter’.

“And For Those Yoruba and Fulani leaders who Are Getting Involved with what Happened In Nuremberg Germany, You Should Stay away from it because what happened with Ekweremadu is a family matter. Stay away or we come after you too. South-East governors were responsible For the killings of IPOB members during Operation Python Dance exercise and we’re coming For them”.