La Liga: Bale must show he is great again – Zidane 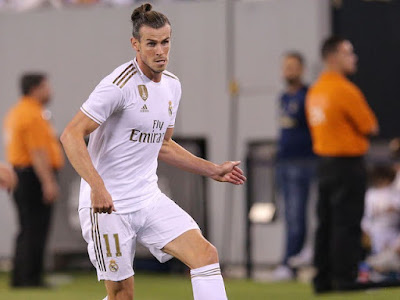 Wales forward Gareth Bale will stay at Real Madrid this season but must now prove he is a “great player”, says boss Zinedine Zidane.

Bale was expected to leave in the summer with Zidane saying it would be a “good thing for everyone” before Real blocked a move to China.

The 30-year-old was then a surprise starter in Real’s opening La Liga win against Celta Vigo last Saturday.

“What has changed is that the player is going to stay,” said Zidane.


The Frenchman is without new signing Eden Hazard after Belgium forward sustained a thigh injury in training last week, while winger Marco Asensio is a long-term absentee.

Zidane said he was impressed with Bale’s overall performance in the 3-1 win over Celta Vigo and commented that his “level defensively was very high”.

“The important thing is the player wants to stay,” he added. “It’s true that a lot was said about him, by me as well, but he is going to stay.

“He is a great player, he has shown that before and he has to show it again. He has to be the player we know that he is.”

Bale joined the Spanish club for £85m from Tottenham in 2013 in what was then a world-record deal.

He has three years left on his contract with the Bernabeu club, where he has won four Champions Leagues, one La Liga title, a Copa del Rey, three Uefa Super Cups and three Club World Cups.

However, injury problems have limited him to 79 La Liga starts in the past four seasons.

He played 42 matches for Real Madrid last season but was booed by the home supporters at times during the campaign.