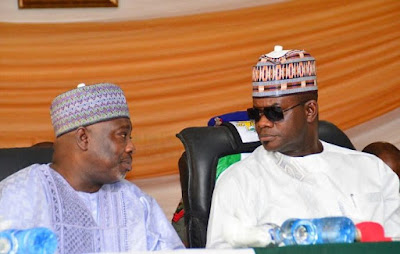 Deputy Governor of Kogi State, Simon Achuba has accused his boss, Governor Yahaya Bello of being intolerant to criticisms and opposing voices to his policies.

The Deputy Governor also accused his boss of delivering below par dividends of democracy, promoting violence and being a dictator.

Achuba, who called himself a victim of the governor, spoke on Channels TV Monday and asked security agencies to tighten security in the state.

“When you assess the government of Yahaya Bello, from day one it has been fighting, fighting and fighting. Anyone that has a different opinion from him becomes an enemy. Anyone that says anything that he is not pleased with, he goes ahead to attack the person.


“In governance, you must give room for criticism whether good or bad. A good leader learns from criticism. Those who criticise you might not necessarily be your enemy.”

“As a deputy governor, I have tried my best internally to ensure that the right things are done. For that sake, I am hated and denied my right.

“This was why in my last press interview I cried out to the world and to the law enforcement agents to focus on Kogi State because of the level of violence being perpetrated by the sitting governor of Kogi State,” Achuba said.

According to the interview on Sunrise Daily Programme, Achuba described his relationship with Bello as ‘rough and not very smooth.’

“The communication broke down at a point where it became very glaring that he was not towing the path of good governance. The state of affairs is no very smooth; it is rough because of the disposition of the governor of Kogi State.

“Everyone elected to the position of governor and the deputy governor is expected to deliver on promises. You are expected to look at the wellbeing of the people and effect changes. These changes are not forthcoming in Kogi State.”