#IPOB members seen attempting to arrest Pres. #Buhari and subject him to a DNA test in Japan
A post shared by Instablog9ja (@instablog9ja) on Aug 27, 2019 at 9:00am PDT

It appears that the Independence People of Biafra (IPOB) members are keen on following the instructions of their leader to the letter as they have laid a siege on the Nigerian Ambassador’s house in Japan with police officers. 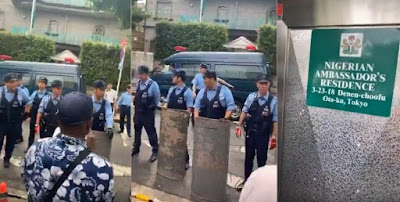 Some days back, Nnamdi Kanu revealed that he had given IPOB members the order to arrest the president once he gets to Japan for his meeting with other African leaders. Even though his assertion seemed more like an exaggeration at the time, things have begun to unfold, just as he had mentioned.

First, it was a procession on the streets of a Japanese city, where the IPOB members had gathered with the aim of protesting against the President over the killings of their kinsmen by officers attached to the Operation Python Dance unit of the Nigerian Army.

And now, they have taken their plans to another level by mobilizing local police officers in Japan with the aim of detaining president Buhari and conducting a DNA check on him.

In the video shared by one IPOB member, their goal is to determine whether the president is truly who he claims to be and not his lookalike, Jubril who they claim is from Sudan.

The protesters then went ahead to state that if their suspicions were right, the President would be handed over to the police for prosecution.