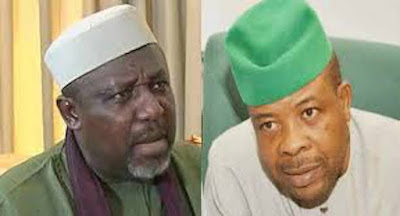 The immediate past governor of Imo State, Rochas Okorocha has said that his successor, Emeka Ihedioha, is “fighting” him because he (Okorocha) defeated the Peoples Democratic Party in 2011 and 2015 to emerge the governor of the state.

Okorocha also accused the PDP-led administration in the state of destroying his projects in order to discredit his achievements.

Okorocha in a statement issued in Owerri on Wednesday by his media aide, Sam Onwuemeodo, said that his successor wants to destroy APC in the South East by fighting him.

The statement read in part, “Governor Emeka Ihedioha-led PDP government in the State is simply fighting back over the defeat they suffered in 2011, and 2015 at the hands of Senator Rochas Okorocha.


They are also playing the politics of how to remain in power in the State having known that they didn’t win the 2019 governorship election because before now, nobody had become the governor of the State with bloated figures from only three local governments out of the 27 in the State.

“In 2011, Senator Okorocha defeated the incumbent then and the PDP candidate, Chief Ikedi Ohakim, and reduced the party’s members in the State House of Assembly from 27 to 6, and they are seeing this time as a fight-back period.

“In 2015, Chief Emeka Ihedioha also lost to Okorocha. And they also believed that the pressure mounted on them by the APC led by Okorocha in the South-East contributed to the defeat of their Presidential Candidate because they could not maximally do what they know how to do best. Governor Ihedioha and his party are using this period too, to fight back.

“For them too, having known that Imo remains the stronghold of APC in the South-East, they now feel that once APC is destroyed in Imo, the Party has been destroyed in the South East. That is another major reason behind the current hostility against Okorocha, his amazing achievements and the APC members in Imo.

“They have indeed, formed the habit of going at night to loot or pull down some of the structures Okorocha built and in the morning they would tell the World that such structures fell down like the waterfall at Freedom Square Owerri just to blackmail the former governor and discredit his achievements. And the issue now is that these structures have been standing for years before Ihedioha’s coming and the question now is, why have they begun to fall within the few months he came to power.”

“Governor Ihedioha has also got about N109billion including the N42.5billion Okorocha left for him, money from the Federation Account, the Local Government Allocations, Internally Generated Revenue, the 13 percent derivation funds, but he has not filled one pothole since he came.”

“It is also worth stating that of all the promises Governor Ihedioha made to Imo people only one has been fulfilled. And that is the promise that he would step on Okorocha’s toes. He has been stepping on the toes of the former governor and his family to the extent that Imo people are now asking him, whether Okorocha and family represent governance. He has not answered this question.”