I have confidence in my team, despite being home-based —Aigbogun 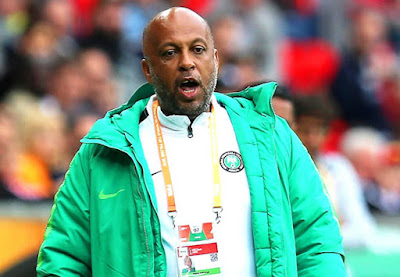 The coach gave the assurance while speaking with the News Agency of Nigeria as his team departed the Nnamdi Azikiwe International Airport for Lagos, en route Rabat.

NAN reports that the team has 18 home-based players, and they had been training in Abuja since early July to finalise preparations for the games.

The coach had officially released the final 18-man list on Monday, with the team to be captained by Plateau United’s Ibrahim Abubakar.

Aigbogun, while expressing his confidence in the players, said he had worked with most of the boys in the build-up to the 2019 FIFA World Cup in Poland.

“I have a lot of confidence in the team, in spite of the players being all home-based.

“My first goal is to win our first match against Burkina Faso on Friday and we will build from there,” he said.

NAN reports that most of the players picked for the Games were part of the training camp in Germany before the FIFA U-20 World Cup held in May and June.

Andrew Randa, the team’s media officer, told NAN the team was physically and psychologically ready to do the nation proud.

He disclosed that a foreign-based player, from Stoke City in England, was earlier expected to join the team in Rabat.

“But he will not be making it due to logistic reasons,” Randa said.

The Flying Eagles will start their campaign in the football event on Friday against Burkina Faso.

The team will then take on South Africa on Aug. 20 and round off the group stage matches against hosts Morocco on Aug. 23, all in Rabat.