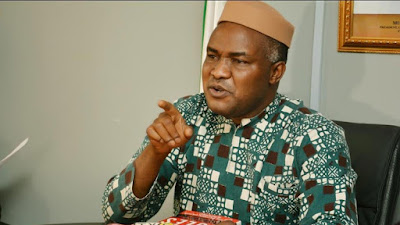 A pro-democracy group, Human Rights Writers Association of Nigeria, HURIWA, has challenged the hierarchy of the Nigeria Police Force, NPF, to transparently account for the “exact whereabouts” of over 500 paraded suspected armed Fulani bandits, kidnappers and other sundry armed hoodlums arrested early in the year.

HURIWA claimed that the police only had delight in parading suspects without being prosecuted.

In a statement by its National Coordinator, Emmanuel Onwubiko, he said it was regrettable that “whereas the police and frequently parade hundreds of suspected armed kidnappers and hoodlums but only very few notably the Billionaire kidnapper Mr. Evans has been prosecuted whereas all others arrested around the Northern axis made up of armed Fulani herdsmen turned bandits and kidnappers have seldomly been known to have been prosecuted the same way that Evans the billionaire kidnapper has faced the long arm of the law before the Lagos State High Court of justice for his heinous crimes against humanity. ”

The Rights group stated that it was “inconceivable that the offices of the Inspector General of Police and the Attorney General of the Federation including the Attorney Generals of the respective states in some Northern States like Zamfara will allow the Zamfara State governor to embark on negotiated settlements with armed Fulani bandits who are responsible for some 3,000 mass murders instead of bringing these culprits to face justice in accordance with the laws.”

HURIWA insisted that there was the “urgency of the now for the top hierarchy of the Nigeria Police Force to transparently render accounts publicly and open up the books and detention facilities to the National Human Rights Commission and credible civil Rights advocacy groups all across the Country to verify the exact situations concerning the progress of prosecution or otherwise of the well over 500 paraded suspected armed Fulani bandits and kidnappers.”

The Rights group said the measure was necessary “so the insinuations that the Police usually set free these armed Fulani bandits and armed herdsmen as soon as they are paraded in the media is doused.”

HURIWA wondered why suddenly there is a “spike in armed Fulani banditry in far away Enugu state in which over two dozen innocent persons including Catholic priests have been slaughtered. There is the accusations that those inflicting terror in Enugu state may have been those set free by the police authority in Abuja and far North.”

The statement reads: “There is a widespread perceptions by a lot of Nigerians that the leadership of the Nigeria Police Force are playing to the gallery by always parading armed suspected kidnappers and armed Fulani herdsmen just to deceive Nigerians but this same Nigeria Police headed by Alhaji Adamu Muhammad is accused of not been straightforward with Nigerians regarding what happens with these armed Fulani bandits as soon as the media goes to the market with the propaganda that they have been arrested and paraded. Under the Freedom of information Act the law makes it incumbent on the Police and law enforcement authority to render proper and verifiable accounts of the arrests and also constantly let Nigerians know what has become of these suspects so this groundswell of accusations of ethnically coloured policing style is not sustained.

“It would be recalled that about 36 SUSPECTED KIDNAPPERS were nabbed and paraded by the Commissioner of police in the state earlier in the year, CP Hakeem Busari, who paraded the suspects at the police command in Lokoja and stated that the feat was made possible through the efforts of men of “Operation Puff Adder” in the state.

“Amongst those paraded were one Christopher Attah, an apprentice at Okoye Clinic, Ankpa, who was arrested for allegedly conspiring with others to kill a doctor, who is the proprietor of the clinic.

“He also said two kidnap suspects, John Okonkwo and Lawal Gambo, were arrested in the process of collecting N10 million ransom for the kidnap of one Mr Uchenna Ogbu, a cow dealer in Lokoja on June 5.

“He noted that Musa Ismaila, Muhammed Bingiri, Abubakar Yahaya and Umaru Bingiri were held for masterminding the kidnap of Ardo of Gegu village also on June 17.

“He added that one Ocheme Kizito was arrested for threatening to kidnap the chairman of the state chapter of the Nigeria Labour Congress (NLC) and members of his family.”

HURIWA stated that the Nigeria Police on Monday, July 14th this year in Abuja paraded 13 suspects alleged to be involved in the kidnap of the district head of Daura (Magajin Garin Daura), Musa Umar.

The right group recalled that “Force Public Relations Officer, Frank Mba, a deputy commissioner of police, who paraded the suspects at the headquarters of the Special Anti-robbery Squad, in Guzape, Abuja, said they were picked up at their hideouts in Daura, Katsina State as well as in Kano State.

“Mba had said the suspects were also responsible for the kidnapping and killing of some expatriates who owned and worked in construction companies in Nigeria.

“The alleged kingpin of the suspects in the Daura monarch’s kidnap, who identified himself as Yusuf Dahiru, told journalists that their action was informed by the need to secure the release of their members who were arrested and placed under custody of security operatives.

HURIWA recalled that in May of this year also about 93 kidnappers on Kaduna-Abuja Highway were paraded.

According to him, “The suspects were arrested from Matari Forest, Niger axis and some were pursued to as far as Katsina. Subsequently in June the same Force spokesman paraded 38 SUSPECTED KIDNAPPERS.”

HURIWA recalled that the Public Relations Officer and Deputy Commissioner of Police, Frank Mba, disclosed that the leader of the gang that kidnapped the UBEC chairman, Samaila Sule aka Shaho was killed in a gun battle with Operation Puff Adder operatives.

The suspects arrested were listed as Abubakar Ahmadu aka Dabo, 27-year-old from Zamfara State living in Rijiana village along Abuja-Kaduna expressway and second in command, who is famed for shooting and killing innocent citizens along the expressway. Other suspects are Musa Hassan aka Anaruwa 26 years old from Kano State who supplies arms and ammunition and coordinates the evacuation and selling of rustled cows, Umar Musa 22 years from Kaduna state, a close confidant of gang leader, Shaho and Mallam Saidu Musa, 57 years from Tudun Wada, Kaduna State who lives in Rijiana village along Abuja-Kaduna expressway.

HURIWA recalled that the kidnappers said their 7-man gang with  AK 47 rifles killed the driver of the UBEC chairman because his stubbornness, adding that they successfully negotiated and collected the ransom which they shared before releasing the victims. In a similar vein, Abubakar Umar aka Dogo, leader of the gang that specialised in kidnapping foreigners confessed that their spiritual leader, Malam Salisu Abubakar who had earlier been arrested by the Police was the pillar of the gang because he gave spiritual clearance before they embark on any operation.

It, therefore, expressed disappointment that not much of information flows out after those media shows of parading armed suspected kidnappers and armed Fulani herdsmen and this conspiratorial silence has therefore led to the emergence of strong suspicions of collusion between the Nigeria Police Force and those armed Fulani bandits.