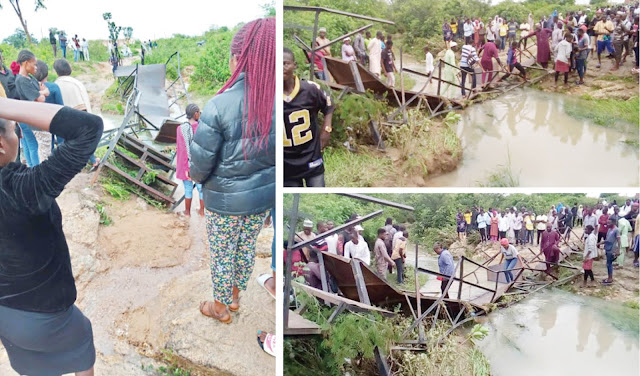 The Abubakar Tafawa Balewa University, Bauchi, has denied it is searching for missing students after the collapse of a bridge in the school reportedly claimed the lives of four students.

A metallic bridge linking the hostels and lecture halls collapsed at about 11.45pm on Monday following a downpour which caused flooding in the school. Seven students were reportedly injured, with some missing.

But ATBU Vice-Chancellor, Muhammad Abdullazeez, who received Bauchi State Governor Bala Mohammed, who paid him a condolence visit on Wednesday, said they later found out that three students died.


He said, “The management felt that it was necessary to construct a metal bridge for between 10 and 15 people at a time. It was not meant for static loads but for dynamic loads, that means, you don’t stand on it, you just pass.

“So they started from two and before you could realise it, there were more than 30 students on the bridge standing, and that bridge was not meant for people to stand.

“Some of the students could not pass and had to also stand, and the bridge suddenly collapsed and that was how we lost three students. As of today, we don’t have any student missing.

“Based on our records, no student is missing for now. Three students –two from Kogi State and one from Benue State – were confirmed dead. Two females and a male and they were all from the department of business education and management studies.”

Abdullazeez said they had set up a committee to investigate the incident.

He thanked the state government and the security agencies for their intervention.

The governor commiserated with the families of the deceased, the school authorities and students over the incident.

Mohammed said the visit was to assess the areas that required urgent attention, pledging that the state government would fix the collapsed bridge.