‘He didn’t breach any law’ — Falana demands release of Sowore 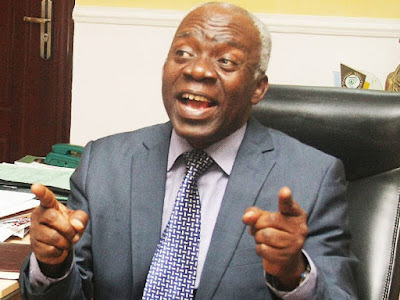 Femi Falana, human rights activist, has called for the release of Omoyele Sowore, presidential candidate of the African Action Congress (AAC), in the 2019 elections.

Falana, a senior advocate of Nigeria (SAN), made the call during a symposium organised by the Coalition for Revolution (CORE), in Lagos, on Monday.

Sowore, convener of #RevolutionNow movement, was arrested by operatives of the Department of State Services (DSS) two days before a planned protest.

Speaking at the event, he assured the people that all those who have been arrested and charged with unlawful assembly and breach of the peace in Osun, Cross River, and Lagos states are going to be defended.

“Those who went to the street to protest in exercise of their right to assemble and complain against injustice, corruption, maladministration in our country, cannot be said to be said to have breached any law in our country,” he said.

“Therefore, the man who was arrested before the protest (Sowore) will also be defended because he has committed no offence. It will interest you to know that even under the colonial regime, Nigerians fought and defended their rights… So let the authorities in Abuja know that the call for revolution is not new. Political leaders in this country have been calling for revolution and nobody charge them with any offence.”

Femi Aborishade, a human rights activist, also called for the release of Sowore, saying there is no offence in embarking on peaceful protests.

“There is no offence in saying they are protesting on the programme of #RevolutionNow. What many people don’t know is that the Nigerian constitution permits people to revolt against any policy of government that are against their interest,” he said.

“Let me use this opportunity to demand the immediate release of Sowore and all other political prisoners in Nigeria… Nigeria has been turned into a prison. We will fight to ensure that Nigeria enjoys fundamental freedom.”

CORE has based its #RevolutionNow movement on five demands which include an economy for works for all masses; an effective and democratic end to insecurity; an end to corruption and for total system of change; the immediate implementation of the N30,000 minimum wage; and free and quality education for all.

The police had earlier sealed off the venue of the symposium but it was opened after the intervention of Falana and other activists.

Commenting on this, the human rights lawyer said: “They say we should not demonstrate on the street. We are trying to gather inside, they ran again to say no, but we are happy that we have won and we will continue to win,” Falana said.

“The struggle is going to be intense, it is going to take time, but I believe we have started. There is no going back.”