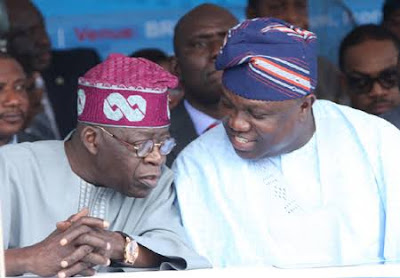 Speaking during Afang Summit in Lagos , Oluwo, said that government in Lagos State starts and ends in Tinubu’s house.

Explaining how Ambode was made to leave office, Oluwo said, “Don’t judge a man you don’t know and you have never met before. People manipulate people to destroy people and they succeeded in doing that to Ambode.

“Ambode deliberately decided not to talk. So, it’s not balanced. One side was busy feeding the public with a negative story. I was not only a government official, but I was also close to him and I was a member of his kitchen cabinet. I know the time he will talk will come. Ambode has made his own determination not to talk for now.”

“And I did not work for Ambode during the primary. I worked for the former Speaker Lagos Assembly, Mr. Adeyemi Ikuforiji, because he is my maternal cousin and I gave him my commitment in 2007 that I would support him in anything.

“I never knew Ambode until Okumagba introduced me to him in 2011 when I took a proposal to his house, and I think at that period, Asiwaju Tinubu had told Ambode that he would be governor of the state.

“So, Ambode is not the kind of guy they woke up from sleep to be the state governor. I didn’t believe it when I was told. I didn’t work for him during the primary because I did not believe Tinubu was behind him.”

According to him, “I don’t want to believe that Tinubu has the intention of making anybody a governor and then give him a second term. Fashola was not meant to go for the second term.

“There was a plan to stop Fashola; I was in Ikuforiji’s camp at that time and Asiwaju told him to start preparing. Whatever that meant, I don’t know, and Ikuforiji was the only one that came to contest against Fashola during the primary. So, people say probably it was because of Fashola’s popularity that earned him a second term.

“That was what made him succumb to Fashola going for the second term; he had it (federal might) in 2015. If the party had been in power in 2011, Fashola would never have gone back, because these guys (Fashola and Ambode) are technocrats.

“They don’t have any party of their own; they don’t have structure. PDP was ready to give Fashola the ticket before Asiwaju ran back.”