Frustration for Manchester City as VAR ensures draw with Spurs 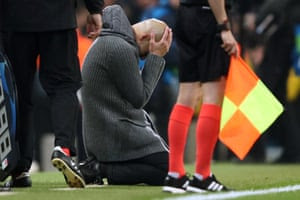 The Premier League champions were denied victory against Tottenham because of a contentious handball in the last minute.

At home against Tottenham, in a game they dominated with the result still in the balance late on, suddenly, a chance materialises. And is taken. Then, just as suddenly, it is taken away.

Back in April, it was Raheem Sterling being denied the goal which would have taken Manchester City to the Champions League semi-finals. On Saturday evening, it was Gabriel Jesus being denied the chance to take all three points. And at the same end too.

As such, a dramatic 2-2 draw sees City fall two behind Liverpool in the title race and, if that sounds premature, check again on the form of England’s two best teams.

There is no margin for error at the top of the Premier League table. It’s the first time City have dropped points in the league since losing to Newcastle all the way back in January. It has been an astonishing, record-breaking run and it ended with a game that City probably did enough in front of goal to win.

But it’s ended because they defended poorly on the only two opportunities that came Tottenham’s way.

If only Sergio Aguero had pressed Tanguy Ndombele better and prevented the ball reaching Erik Lamela on the first goal, if only Rodrigo has stepped up instead of stepping back when Lamela bore down on goal, then City would probably have racked up another three points.

But Ederson’s net rippled, just as it did during the second half when Lucas Moura scored with a near-post header just 19 seconds after coming on as a substitute. Punishment for City for their inability to convert at the other end.

So, the game ended in rancour, with City fans flipping the middle finger towards referee Michael Oliver and cursing the Video Assistant Referee too.

Aymeric Laporte was adjudged to have handled a cross as it flew towards him inside the area, a marginal call at best, but one which cost City two points. They will win other matches this season which they don’t boss as much as this one.

Spurs go back to London wondering how they got something out of it.

But if there is to be a bright spot to be gleaned from the game for City then it is in the form of Kevin de Bruyne. City were only able to name De Bruyne in their Premier League matchday squad 20 times last season and still managed to pip Liverpool to the title.

That tells you something about the strength in depth in the City squad, as well as the clarity of purpose instilled in them by their manager. There is no question, however, that City are a better team with De Bruyne. And, following a tour-de-force performance here, it’s clear to see the stand-in captain is back to his best.

Last season, he managed only two Premier League assists. By half-time here, with the season only a game-and-a-half old, he had bettered that tally.

Adding to the one he got against West Ham last week, De Bruyne supplied two crosses of the highest calibre to put City in the clear. And yet somehow, despite a shot tally of over 30 by the final whistle, City did not prevail.

De Bruyne’s first assist was a sumptuous first time cross to the back post to pick out Raheem Sterling, whose header was far harder to steer on target than first glances suggested. Then, the Belgian pumped a beautiful low cross to edge of the six-yard box, from where Aguero finished with a deft touch.

That would be as good as it got for the Argentina striker, who was hauled off for Jesus following the second Tottenham equaliser. There followed a brief set-to between Aguero and Guardiola.

We have become accustomed to the sight of Pep delivering one-on-one coaching sessions in the gaps between play but, on this occasion, Aguero was having none of it. He crossed the white line and Guardiola put his hand on his chest before saying something, but Aguero had plenty to say in return.

City's all-time top scorer made for his seat on the bench and Guardiola was prevented from taking the argument any further when assistant Mikel Arteta diverted his attention back to the field of play.

It might well have stemmed from Aguero’s part in the first Spurs goal, when he was slow to the threat of the ball moving through midfield. To substitute him, with the game in the balance, was a strange decision, particularly given the number of chances that City would go on to create.

There may be more to follow on that row later, even if they had embraced when Jesus bagged what looked like the winner.

The Brazilian had finished beautifully right at the death but there were clues that things were not going to go City's way even as the Etihad jumped and sang. The assistant referee did not make his way back to the halfway line, Oliver remained inside the City half as the goal was checked.

That old familiar feeling. Guardiola has said plenty of times he is an advocate of VAR. He might be saying it through gritted teeth this evening.