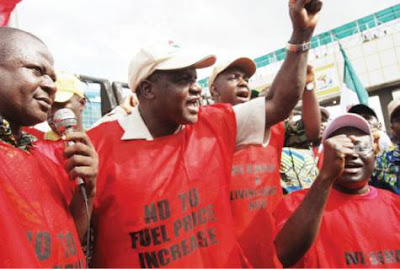 The Federal Government has attributed the delay in the implementation of the “consequential adjustment” of the N30,000 new minimum wage to the unrealistic demands of labour unions.

The Chairman, National Salaries, Income and Wages Commission, Chief Richard Egbule, made this known in an interview with the News Agency of Nigeria in Abuja on Monday.

Egbule explained that the current demand of the labour unions would raise the total wage bill too high and that was why government could not accept their proposed salary adjustments.


“Labour is asking for consequential adjustment and government in its wisdom had made budgetary provision for an adjustment of N10,000 across the board for those already earning above N30,000 per month.

“However, the unions have refused this offer, saying that because the increase in minimum wage from 18,000 to N30, 000 was 66 per cent, therefore they want 66 per cent increment across the board.

“We told them that the minimum wage was not raised from N18, 000 to N30, 000 through percentage increase but as a result of consideration of economic factors including ability to pay.

“However, we said that if they want consequential adjustments in percentage terms, we will use a percentage that when applied will not exceed what has been provided for in the budget.

“The computation based on percentage which government had given to labour, was 9.5 per cent from level 7 to 14 including level 1 to 6 of those salary structures that did not benefit from the minimum wage.

“And then five per cent from level 15 to 17, labour countered the offer and proposed 30 per cent increase for workers on grade levels 7 to 14 and 25 per cent for those on levels 15 to 17.

Egbule said that at the last meeting between the Federal Government and the labour unions, the government proposed a 10 per cent increment for workers on grade levels seven to 14 and a 5.5 per cent increase for those on levels 15 to 17.

He advised labour to come to a compromise because government had so far been magnanimous in agreeing to increase salaries without any threat of downsizing.

Meanwhile, the Joint National Public Service Negotiating Council and representatives of the Federal Government will on Wednesday and Thursday meet again in Abuja to discuss modalities for the implementation of the new Minimum Wage of N30,000.

Secrtetary of the Joint National Public Service Negotiating Council, Alade Lawal, said he was optimistic that this week’s meetings would resolve all differences.

“Both parties will meet again to reach an agreement hopefully. We have presented our position and we hope government will now reason with us,” he said.