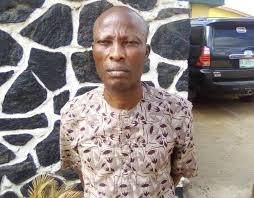 A 52-year-old man, Emmanuel Ikhine, has been arrested by the Ogun State Police Command for allegedly raping and impregnating his 18-year-old daughter.

Ikhine reportedly had carnal knowledge of his daughter several times, which resulted in the pregnancy.

The suspect was said to have divorced his wife a few years ago and since then had been having carnal knowledge of his only female child out of the three children the couple had together.

The Police Public Relations Officer in the state, Abimbola Oyeyemi, confirmed the incident in a statement on Monday.

Oyeyemi said the suspect was arrested following a report by a neighbour, Yemisi Ashade.

The PPRO said the victim reported the case to the neighbour when she could no longer bear the sexual assault by her father.

According to Oyeyemi, the daughter said she was threatened not to reveal the affair between her and her father to anyone.

The PPRO said the command confirmed that the daughter was pregnant for her father after a test was conducted on her.

He added, “The victim stated that she could no longer bear the sexual assault hence, she confided in their neighbour.

“Upon the report, the DPO, Sango-Ota Police Station, CSP Godwin Idehai, dispatched detectives to the scene, where the randy father was promptly arrested.

“On interrogation, he made a confessional statement that he had been having carnal knowledge of the victim since he separated from his wife.

“The victim, who claimed to be the only female among the three children of her father, explained how the suspect had been sleeping with her whenever her brothers were not around, but when she could no longer bear it, she reported to their neighbour, who brought her to the station.

“The victim was taken to a general hospital, where it was confirmed that she was already pregnant for her father.

“Meanwhile, the Commissioner of Police, Bashir Makama, has ordered the immediate transfer of the suspect to the Anti-Human Trafficking and Child Labour Unit of the State Criminal Investigation and Intelligence Department for further investigation and prosecution.”