EXPOSED: How NFF spent millions on an all-expense trip paid for by CAF 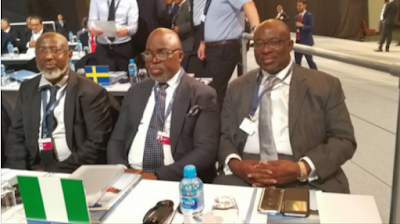 Despite provisions by the Confederation of African Football (CAF), Nigeria Football Federation (NFF) spent at least $19,000 (N4 million) as travel allowance for three of its officials who attended CAF’s congress which held in Egypt in 2015.

TheCable reports that documents obtained showed that the Special Presidential Investigation Panel for the recovery of Public Property (SPIP) had written to CAF on June 10, 2019, to ask what is required from the delegates to participate in the congress and what CAF’s financial responsibilities were.

Responding in a letter dated June 30, 2019, CAF explained that “participation of all the national associations in the congress is free and requires no contribution from the latter to the holding of these general assemblies and the expenses are borne by the CAF for all the representatives of the participating federations at these congresses.”

Although the NFF, in its letter to CAF dated July 8, 2019, said “the amount of N60,000 and $19, 269 constituted local transport (60,000) and estacode allowances ($19, 269) for the NFF delegation that travelled to Egypt for the congress,” an executive member of CAF who did not want to be named, told TheCable that CAF made provisions for everything.

“In fact, each member from every association make nothing less than $300 per day, excluding accommodation, feeding, and local transportation,” he said.

Top civil servants, including a permanent secretary, also said that NFF staff members are subject to civil service rules, therefore they should not have allocated another fund when provisions were already made by CAF, their host.

The money was part of the $565,471 NFF withdrew from its domiciliary account in April 2015 to cover costs which included payment of salaries for February 2015.

Mouad Hajji, CAF general secretary, was not immediately available to answer further questions on the matter.

Okoi Obono-Obla, before he was suspended as chairman of the SPIP, however, said that NFF’s action “is fraudulent”, wondering why such amount was spent on an all-expense paid congress.

“It is well known fact that CAF caters for its member associations to attend its congress. CAF pays for business class tickets for the association’s representatives, accommodates and feeds them in a 5-star hotel, gives them a car for local runs as well as pay them estacode,” he said.

“If CAF does all these things, it then means that not one dollar should be spent by the association’s delegates to the congress. 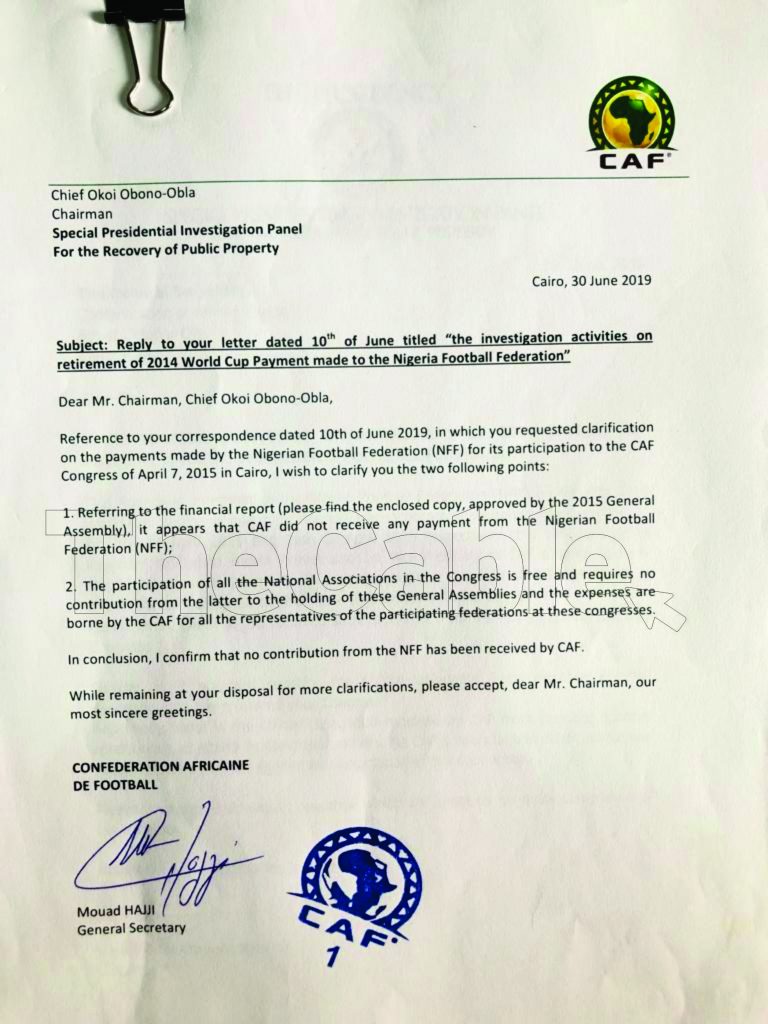 “In contrary, could it be said that NFF illegally collected funds for flights, accommodation, feeding, local runs and paid the delegates estacodes which will amount to double earnings from the delegates of the NFF?

“In its face, the conduct of NFF is unethical and fraudulent by any imagination. It’s outright stealing of government funds in the guise of attending an event which has already been paid for.”

Obono-Obla said when the SPIP got the letter from CAF, he asked the director of operations to confront NFF, but they had gone underground possibly for fear of the ongoing investigation.

He added that the court had issued a warrant of arrest since they refused to turn up. The case has since been adjourned till September.

‘TRAVEL ALLOWANCE NOT COVERED BY CAF’

On his part, Ademola Olajire, NFF’s media director, argued that travel allowances were not paid for by CAF.

Responding to inquiries, Olajire said: “NFF has never said it covered expenses of delegates or paid CAF for the congress. Only traveling allowances were paid for, which was not covered by CAF.”

According to him, the letter SPIP sent to CAF “was incorrect, as there were five different services on that expenditure sheet but they said NFF spent the whole money on CAF congress, strangely overlooking the other services the monies were spent on.”

He insisted that the $19,000 was for estacode which CAF didn’t pay but a CAF director, who spoke off the record, said the continental body paid for everything, including estacode.

In its July 8 letter, NFF had said it was surprised CAF would receive a letter with regards to an investigation on its activities by a Nigerian agency and CAF would proceed to respond without seeking clarifications from NFF.

The NFF also accused Obono-Obla of allowing his office to be used by elements seeking to destroy Nigerian football. SPIP said investigation is ongoing.

The documents as obtained by TheCable: 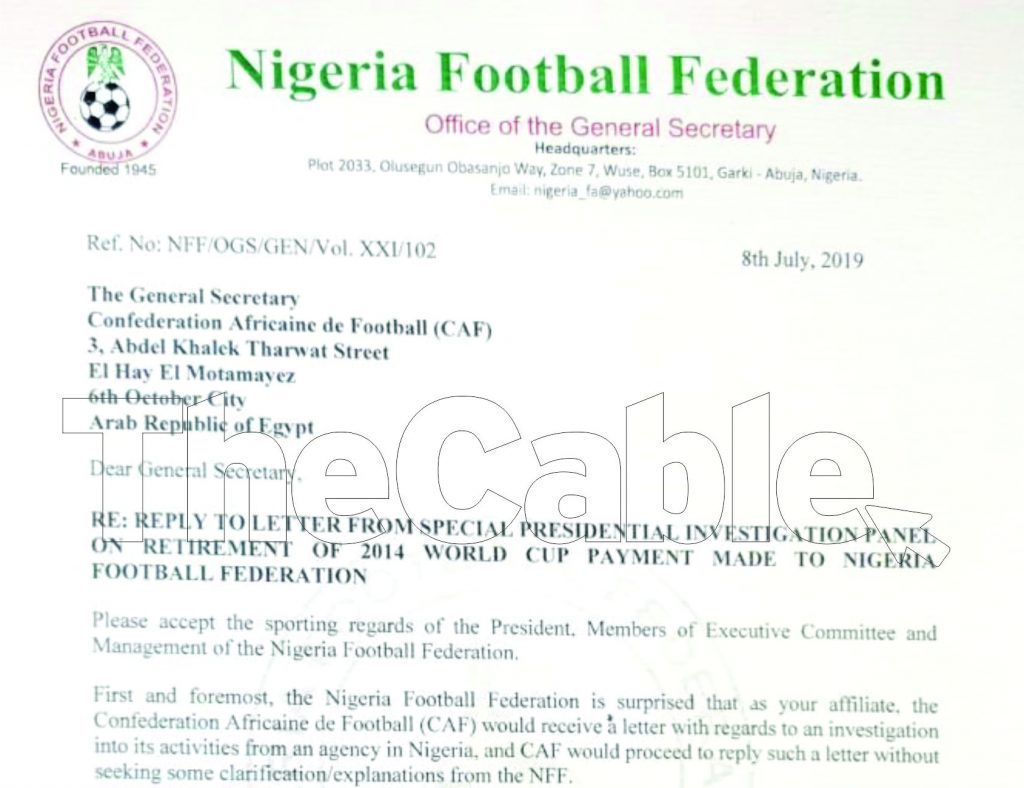 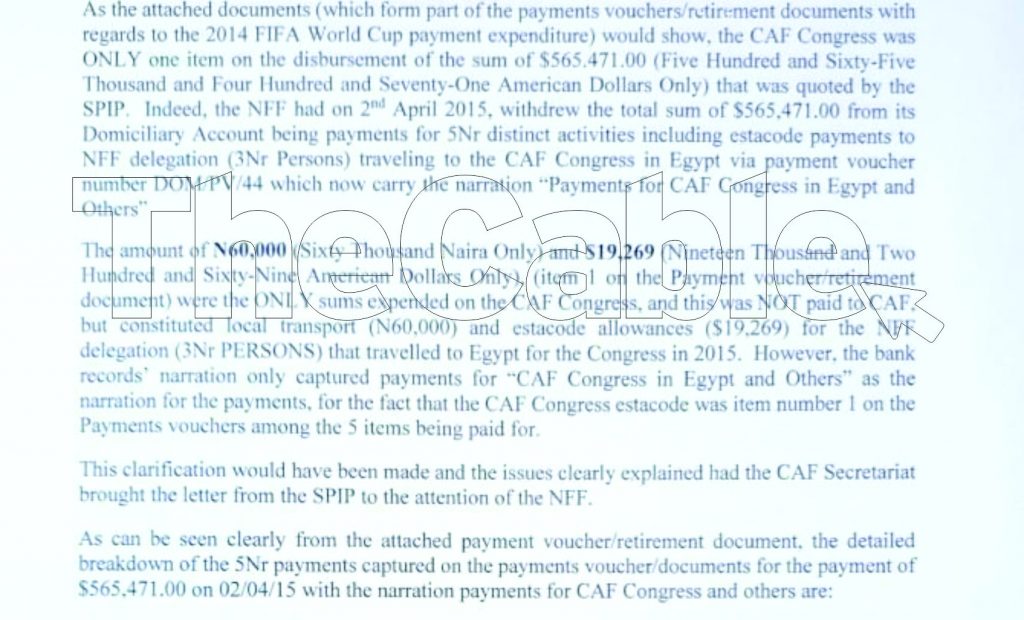 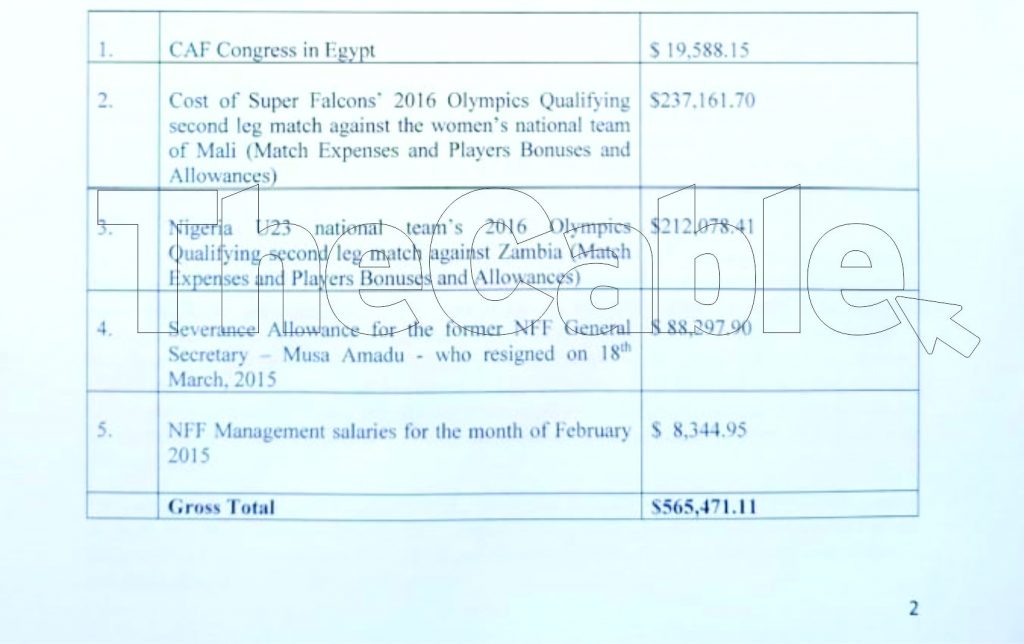 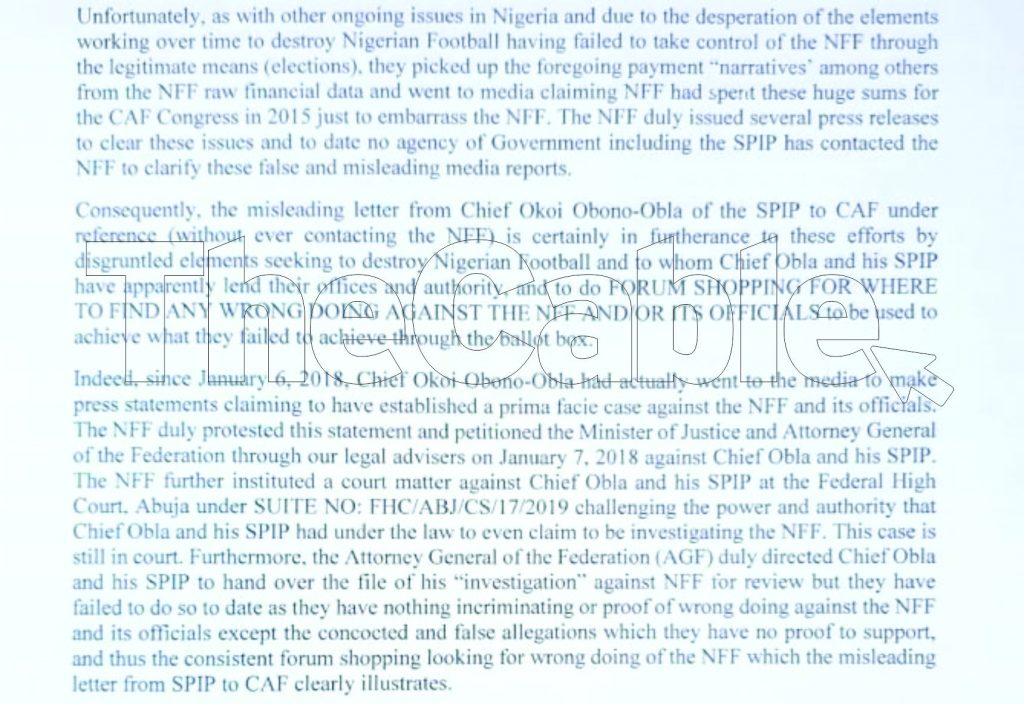 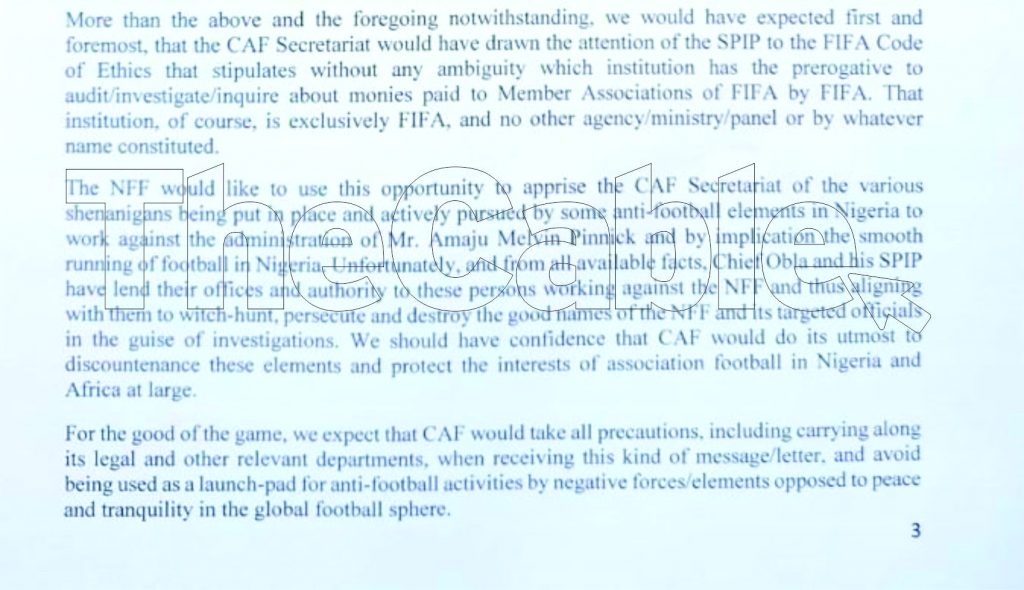