Everton’s offer too good to turn down -Iwobi 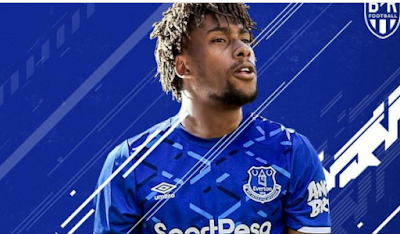 Alex Iwobi has opened up on how speaking with Marco Silva and Marcel Brands, Everton’s coach and director of football, convinced him to join the Toffees in the summer transfer window.

In an interview on Everton TV, the Super Eagles forward admitted that what Silva and Brands offered him was too good to be turned down.

The Merseyside club completed a post-deadline deal to sign the 23-year-old on a five-year deal on Thursday night.

He made 149 appearances for Arsenal, scoring 15 goals in his outings for the north London club side in 2015.

“I spoke to the manager and Marcel and they almost lured me in. The offer was too attractive for me to turn down,” he said.

“The manager was telling me, ‘There is a spot for you, we will take care of you’. Basically, all the things you want to hear as a player.

“I always had that youngster tag at Arsenal, so hopefully with this move I am able to make a name for myself in the Premier League and create history with Everton.”

Iwobi also spoke on the prospects of working harder and improving under his new manager.

“It is exciting times for Everton. I was able to look at the transfers and players they have brought in – some great talent. It is not just me,” he said.

“There were quality players here before [the summer] and they are still here. The manager has worked with Richarlison for a long while and made a name for him.

“Hopefully he can do the same for not just me but Moise Kean and a few others who came in, too.”