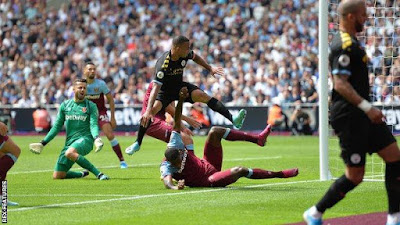 Raheem Sterling scored a hat-trick as Manchester City got their title defence off to a winning start with victory at West Ham in a game that saw the video assistant referee play a significant role for the first time in the Premier League.

The technology is making its debut in England’s top flight this season and, after last night’s curtain-raiser between Liverpool and Norwich passed off without incident, it took centre-stage on Saturday.

VAR was first called on when Gabriel Jesus appeared to have put City 3-0 up midway through the second half, only for Raheem Sterling to be ruled fractionally offside in the build-up.


After Sterling added City’s third, a moment also reviewed for possible offside, the system then awarded the visitors a penalty retake after Sergio Aguero’s tame effort was saved by Lukas Fabianski but Declan Rice was deemed to have encroached into the area.

The striker made no mistake at the second attempt.

This was, nevertheless, a dominant and deserved victory for Pep Guardiola’s side, who laid down a marker for the season ahead in emphatic fashion.

The visitors had looked a little short of their best early on but they took the lead midway through the first half when Jesus flicked in Kyle Walker’s low ball into the box.

They doubled their advantage six minutes into the second half, Sterling sliding in a low shot after being put through by Kevin de Bruyne.

After Jesus’ VAR-denied effort, a third did come for City as Sterling ran on to a ball over the defence before coolly lobbing Fabianski. And after Aguero’s retaken penalty, Sterling got his third in injury time to complete the rout.