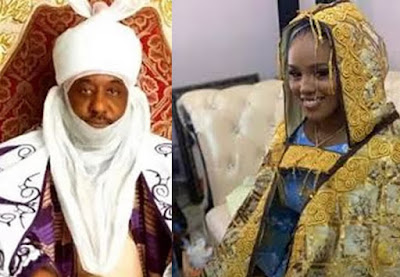 The new bride to the Emir of Kano, Sai’datu Mohammed Barkindo, returned home after the successful completion of her degree programme in the United Kingdom and the Quranic graduation ceremony.

It was learnt that Sai’datu went to the UK to complete her university degree after the wedding at the age of 18, as she had earlier completed her secondary school at that point in time.

Sai’datu was brought to the Emir’s palace on Saturday, while the traditional budakai ceremony was held on Sunday.


In another development, on the backdrop of this year’s World Twin Day, which was celebrated on Saturday, the Kano Emir, described twins across the world as blessing.

The Kano monarch made the remark when a non-governmental organisation, The Cornerstone, paid him a visit at his palace, as part of activities to commemorate the Day.

Sanusi, who was represented by Danmadamin Kano, Ibrahim Hamza Bayero, urged the twins on the platform of Cornerstone to channel their plight by writing to the palace for prompt action.

Also, the NGO distributed some relief materials to two women who gave birth to two sets of twins at the Murtala Mohammed Specialist Hospital in Kano.

However, the co-founder of the organization, Faiza Mukthar, noted that the gesture was part of the NGO’s efforts to celebrate the World Twins Day, as well as to empower less privileged twins in the State.

”This is the first time that we are celebrating the twins’ festival, especially here in Nigeria.

“We organise the event so as to have fun among us twins, to demonstrate to the world that we are not only excellent but unique and have achieved a lot.

“We are here at the Murtala Mohammed Specialist Hospital to extend gifts to both female newly born twins.”