4:49 AM CuteNaija 0 Latest News in Nigeria 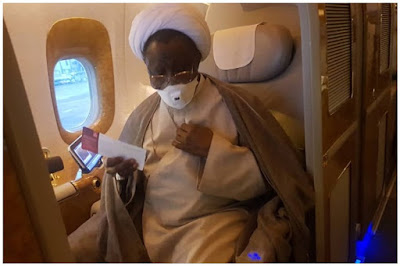 Plans by the leader of the Islamic Movement in Nigeria, Sheikh Ibraheem El-Zakzaky, to travel abroad again for medical treatment have been delayed by the ongoing court vacation.

It was gathered that the Shi’ites’ leader was also waiting to see his lawyers to fine-tune strategies for the filing of a fresh application for leave of the court to permit him to seek medical attention in Turkey, Malaysia or Indonesia.

After spending over three years in the custody of the Department of State Services, the cleric and his wife, Zeenat, had on August 12, 2019, flew to Medenta Hospital, New Delhi, India, for medical attention.

But the cleric returned to the country barely four days later, accusing the Federal Government of interfering with the treatment.

The religious leader, in a video, said he was discussing the options given to him with his wife when security operatives asked him to prepare to leave for Nigeria.

The IMN leader and his wife had been kept at a detention facility in Kaduna since they returned to the country on August 16.

The Coordinator, Free El-Zakzaky Campaign Committee, Abubakar Abdulrahman, confirmed to our correspondent in Abuja on Monday, that the application for the IMN leader’s medical treatment overseas would be filed when the court resumed.

The 2019 annual vacation of the judiciary, which commenced on July 8, will end on September 13, while normal court activities are expected to resume on September 16.

Shi’ite’s spokesman, Ibrahim Musa, also said El-Zakzaky was due to meet with his lawyers for discussions this week, adding that the plan for foreign medical treatment would be discussed during the meeting.

The lawyer for the IMN leader, Femi Falana (SAN), confirmed that he was due to meet his client, but said he was not aware that the court vacation was responsible for the delay in the proposed overseas medical treatment for El-Zakzaky.

“I will likely see him this week, but I am not aware the court vacation is responsible for the delay,” he said on the phone.

The National Human Rights Commission on Monday, however, called for dialogue in handling the medical trip.

A statement by the NHRC’s Director Corporate Affairs & External Linkages, Lamber Oparah, partly read, “The Executive Secretary of the commission, Tony Ojukwu, said the IMN leader’s right to medical treatment should not be compromised under any circumstances.

“Ojukwu also called on IMN members to tow the part of peace and desist from the use of violence including hate speech in expressing their grievances.”