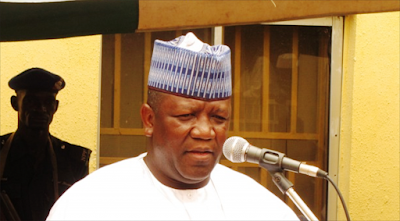 The country home of former governor Abdulaziz Yari was raided Sunday night by 20 operatives of the Economic and Financial Crimes Commission.

The EFCC has not officially given the reason for the raid in Talata Marafa, about 100km from Gusau, the capital of Zamfara.

According to reports, EFCC operatives spent about five hours in Yari’s home. It is not clear yet if they got anything incriminating as the governor and his family were not in the house.

The former governor of Zamfara state, who was chairman of the Nigeria Governors Forum for four years, has become the second political notable to be targeted by the Economic and Financial Crimes Commission after a similar raid on the properties of former governor Rochas Okorocha of Imo.


Recall that the governorship candidate of the All Progressives Grand Alliance (APGA), in Zamfara State, Sani Shinkafi, had accused Yari, of looting over N251billion.

He also accused Yari of leaving liabilities of about N151.1billion.

“Unremitted national housing fund deductions from salaries from 2016 to 2019 stands at N1,431,645,305,99. The liabilities under the ministry of education which involves external examinations and institutions such as Crescent University Abeokuta, Al-Hikma University, Ilorin and Key Science Academy Abuja stands at N2,812,172.155″, he alleged.

Shinkafi further alleged that out of the two billion naira approved by the Yari administration for the payment of gratuity owed to retired workers in the state, only retired permanent secretaries were paid N400milion, with N1.6billion unaccounted for.