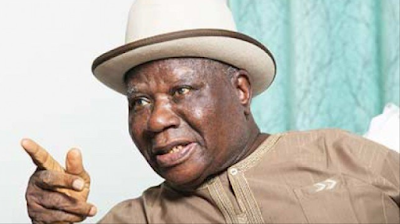 Edwin Clark, Ijaw leader, says it is wrong for the senate to have ordered Godwin Obaseki, Edo state governor, to issue a fresh proclamation for the inauguration of the state house of assembly.

According to Clark, the power to make a proclamation of the commencement of the state house of assembly rests exclusively with the governor.

The governor had ignored the order despite a threat by the national assembly that it would take over the functions of the state assembly.

“It is unconstitutional and wrong for the National Assembly to ‘order or direct’ the Edo State Governor to issue a fresh proclamation. Section 3 places such activity squarely in the Exclusive List,” a statement released by the elder statesman on Thursday read.

“There was an announcement that all elected APC members in the National Assembly should assemble at the International Conference Centre that morning, and Mr President as the leader of the APC, who had just returned from an overseas trip, was to address the members at the meeting before going to the National Assembly for the inauguration.

“The above action is in sync with Section 102 of the 1999 Constitution which states that ‘a House of Assembly may act notwithstanding any vacancy in its membership, and the presence or participation of any person not entitled to be present at or to participate in the proceedings of the House shall not invalidate such proceedings.”