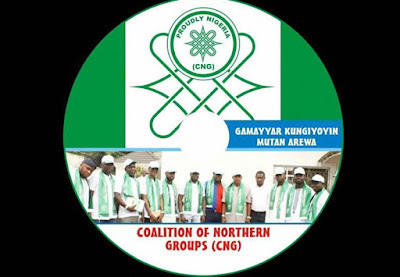 The Coalition of Northern Groups has distanced itself from the planned revolution march slated for Monday nationwide.

The CNG declared that those organising the protest are “couriers of foreign destabilisation plot” that are not in the interest of the North.

It, therefore, urged Northerners to disregard calls for the protest march.

Addressing a press conference at the Arewa House, Kaduna, on Sunday, CNG’s spokesman, Abdul-Azeez Suleiman, said the North won’t participate in the protest.


According to him, the group will not participate, support or encourage any actions that are potentially dangerous to the region.

He, therefore, called on all northerners to shun the protest and resist any attempt of being dragged into participating in any way in a movement that turns out to the disadvantage of the region.

The CNG spokesman said: “The attention of the Coalition of Northern Groups has been called to an ongoing mobilisation by some anonymous groups for a certain “Revolution March” to hold nationwide beginning Monday, 5th March, 2019.

After carefully reviewing the calls, the CNG has arrived at the following conclusions:

“That the ultimate aim of the proponents of the march who are, at best, couriers of a foreign destabilisation plot, has not been clearly and satisfactorily defined, which renders the whole exercise suspect.

“CNG remains unshakable in its understanding that every civil disagreement can be resolved through honest, sincere and open discussions without unnecessary recourse to actions liable to further inflame tensions without achieving lasting results.

“We have failed to see how the interest of, particularly the northern people, can be served by a movement led by those who have been directly or remotely connected to the decades-old agenda for the emasculation of the North.

“The CNG calls on all northerners to disregard the calls and resist the temptation of being dragged into participating in any way in a movement that would turn out to the disadvantage of the region.

“The CNG categorically dissociates itself from the organisation, promotion and participation in any conduct capable of worsening the already dicey situation the country, in particular the North.

He added: "We reassert our commitment to the propagation and protection of the rights of all northerners and never to fall into the traps set by its traditional internal and external traducers in whatever guise.

“We are quite aware of the covert and overt machinations of some western supremacists to achieve the final destabilisation of Africa by targeting some key African nations, which may not exclude Nigeria.

The similar foreign agenda that unfolded with the ugly scenarios of destruction in Libya, Syria, Sudan, Yemen, Egypt and others are very fresh for us to realise the futility of jumping on a flight without knowing its actual destination.

“For the avoidance of doubt, the North shall, at all times, remain ready to enter into any civilised and decent discussion with any part of the country for whatever intent and purpose without succumbing to temptations of exposing innocent lives to unnecessary danger.

“Up to this point, the North has maintained its position as the bulwark of respect, integrity, dignity, decorum, tradition, decency, morality, civilisation, etiquette, good behaviour, politeness, accommodation, and all other positive traits.

“In the unfolding political chess game, it is essential, therefore, that the North anticipates and checkmates the maneuvers of its self-appointed enemies in all possible and likely scenarios such as this one.”

Recall that the CNG recently issued a 30-day ultimatum to governors in the North who opposed the Ruga settlement policy of the Federal Government to rescind their decision or face the wrath of the group.

The group had also issued a three-month notice to Igbo in the northern states to leave the region two years ago.