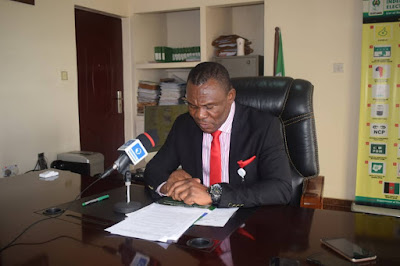 The Resident Electoral Commissioner in charge of Cross River State, Dr. Frankland Briyai, has resigned his appointment to enable him contest the governorship race in Bayelsa State.

He announced his resignation on Thursday at the state headquarters of the Independent National Electoral Commission in Calabar, just before a send-off party organised in his honour.

Briyai told journalists that he had to resign to heed the call of the people of Bayelsa State, youth groups in Niger Delta, northern and eastern Nigeria, ECOWAS, Africa and the Commonwealth to contest the November 16, 2019 governorship election.

“I have critically considered their demand and dilemma. I have heard their call to selfless service that had always been my lifestyle.


“For the sake of the very important call to rescue the kind, peace-loving and great people of Bayelsa State, I have resigned my appointment as a Resident Electoral Commissioner in the Independent National Electoral Commission of the Federal Republic of Nigeria, with effect from Thursday, the 8th of August, 2019,” he said.

He said the successful conduct of elections in the state since he took over from Mike Igini in 2017, his integrity and hard work which had made him win several awards, had confirmed his people’s arguments that he has “the potentials and capacity to impact a remarkable change and lift Bayelsa State up to the next glorious level that would make it stand proudly among the great states in the Federal Republic of Nigeria and bring back the glory of all land to the oil-rich small state of Bayelsa.”