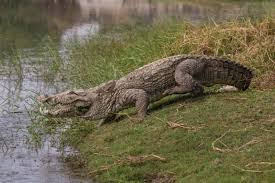 A crocodile has eaten a 10-year-old boy alive in front of his siblings in the southern Philippines.

He was reportedly snatched from a boat he was on with his two older siblings near the town of Balabac – an area notorious for attacks by enormous crocodiles.

The saltwater predators’ shrinking habitat is leading to increased confrontation between the animals and humans, authorities in the Philippines said.

The child’s father was unable to find his son during an overnight search, but a fisherman later discovered the boy’s half-eaten remains in a mangrove swamp late on Monday, according to police.

The Philippines’ rapidly expanding economy and population has meant the crocodiles – which can grow to well over 5 metres long and weigh up to a tonne – have been forced out of their former habitats as towns and cities have grown.

As a result, higher numbers of altercations have been recorded in recent years.

“Since 2015, we’ve never had a year with zero (crocodile) attacks” in Balabac, said Jovic Pabello, a spokesman for a government council that works to conserve the environment of the Palawan island group that includes Balabac.

“It’s a conflict on water use,” he told AFP.

In February this year a crocodile attacked a 12-year-old boy who was swimming in a Balabac river, but he managed to tear himself free from the animal when his siblings hit the reptile’s head with oars until it let him go, Mr Pabello said.

The Palawan island group, often called the Philippines’ “last frontier” is home to a vast diversity of flora and fauna, but is threatened by unchecked development.

Saltwater crocodiles are the largest living reptiles, with the biggest ever measured found in this area of the Philippines in 2011. The monster specimen stretched 20 ft 3 in (6.17m), took over three weeks to hunt and around 100 people to bring onto land. He was placed in captivity, but died 18 months later.