COZA rape allegation: Fatoyinbo returns to pulpit a month after stepping down 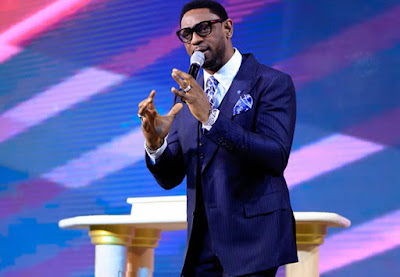 The Senior Pastor of the Commonwealth of Zion Assembly, Biodun Fatoyinbo, has returned to the pulpit barely a month after stepping down.

Scores of protesters stormed the church in early July to protest against Fatoyinbo who was accused of raping photographer, Busola Dakolo, 20 years ago,

Amid the protest, Fatoyinbo announced his decision to step down, while his wife, Modele, had taken charge of the church — a move which seemed to pacify protesters.

On Sunday, however, the COZA senior pastor delivered a sermon titled, Sudden victories, in a packed church auditorium.

Fatoyinbo said it was written in the Bible that Christians would always face persecution, but God would ensure that they are victorious.

He said, “As a Christian, you must face opposition. If God, who is holy and faithful has enemies, you are sure going to have.”

The cleric said most times when faced with troubles, Christians have the tendency to call everyone except God for help.

He noted that the reason most Christians fail is that they address challenging circumstances on the surface, instead of addressing the root of the matter, which is the enemy and putting him in his place.

“In wrestling, any method can be used. When faced with challenging circumstances, pray, fast, decree, confess and prophesy God’s victory over your life.

“Most contrary situations around you are set up by the enemy to ripple your faith and keep you on a spot,” he preached.

Fatoyinbo prophesied that his parishioners would witness victory in the new month of August.

He is currently being probed by the Nigeria Police Force for allegedly raping the wife of popular musician, Timi Dakolo, 20 years ago when she was a teenager.