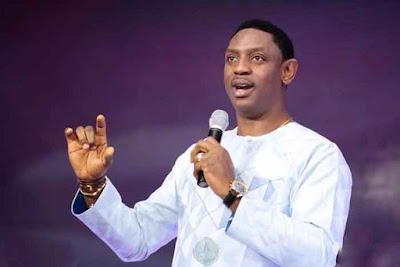 Commonwealth of Zion Assembly (COZA) founder, Pastor Biodun Fatoyinbo is still being interrogated by detectives at the Force Criminal Investigation and Intelligence Department (FCIID) in Abuja over alleged rape of Busola Dakolo.

Mrs. Dakolo in June accused the pastor in a bare-it-all interview of allegedly raping her when she was a teenager inside her family’s sitting room one early morning he came visiting.

She gave the details of the encounter and explained how the pastor went on to exploit her vulnerability from that day, adding that a few pastors were aware and tried to assuage her family after her siblings took the war to Fatoyinbo back then.

Although Fatoyinbo denied the allegation claiming it was a calculated attempt to rubbish him, Dakolo’s case saw many other victims of the pastor’s alleged sexual assault speaking out on social media.


Efforts by the Pentecostal Fellowship of Nigeria (PFN) to wade into the matter was said to have been frustrated following the refusal of the pastor to honour their invitation.

According to reports the police have located Mrs. Dakolo’s siblings including the sister she alleged was upstairs the day Fatoyinbo allegedly raped her at her family’s residence.

It was gathered that detectives chose to invite the pastor after following other clues to verify certain claims.

The pastor whose team was said to have been sent out of the department was interrogated for several hours by a team specifically tasked to handle the case by the Inspector General of Police (IG) Mohammed Adamu through the DIG Investigation.

It was gathered that the detectives may detain the pastor unless there were guarantees he would not jump administrative bail by the police.

Confirming the development, Police spokesman Frank Mba, a Deputy Commissioner (DCP) told newsmen that It was too early to say if Fatoyinbo would be detained, adding that only the investigators can arrive at that decision based on their findings.

He said: “Yes, he is currently at FCIID undergoing interrogation. We have been conducting discreet investigation. We are making efforts to reach one or two other pastors she alleged intervened then.

“It was a deliberate investigative strategy to bring Fatoyinbo much later after we must have gotten other things. Some Nigerians were thinking we did not want to talk to him but that is not so.

“He is with us now and I cannot say if he will be detained nor not. Investigators will have to determine that. They might choose to detain him or grant him bail while investigation continues.

“We have the statement of Busola Dakolo already. She earlier made a statement to the police. Nigerians are assured that we will diligently investigate and conclude this case.”