8:42 AM CuteNaija 1 Latest News in Nigeria 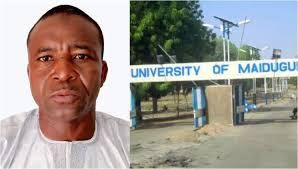 Controversy has continued to follow the claim that a lecturer at the University of Maiduguri, Dr Yakubu Nura, won the World Physics Competition.

The announcement of the award, which went viral on the social media three days ago, was celebrated by media professional, Kadara Ahmed, and Kaduna State politician, Senator Shehu Sani.

Sani, in particular, had called on northern governors and the President to celebrate Nura’s feat in grand style.

It had been claimed that Nuru defeated 5,720 ‘contenders’ in 97 countries to emerge winner of the award, which made him ‘the Father of Modern Einstein’s Planetary Equation Studies in Physics.’

But on Monday, a social commentator, Dr Farooq Kperogi, said the award was fraudulent.

Kperogi, an associate professor of journalism, on Twitter said aside from the fact that the organisers of the award did not have a website, the award was given at a fee.

He wrote, “The truth is that Dr. Nura is the willing victim of a scam; a kind of scam I call scams of ego which prey on the status anxieties and low self-esteem of insecure, fraud-prone people.

“World Championship, the ‘organisation’ that conferred the ‘award’ on Dr. Nura, is a well-known scam operation that does not, for strategically fraudulent reasons, have a site with its own domain name. It uses a free account to perpetrate its scams.

“Anyone who pays a fee can get any—I mean any—award from the site.”

Kperogi pointed out that some past Nigerian winners had also publicised their feats in the media to gain popularity.

“For instance, one Dr. Kaywood Leizou of the Niger Delta University got The Guardian to write a story about his ‘award’ from this same fraudulent site on Oct 19, 2018. Titled, ‘Bayelsa don wins global chemical sciences contest’.

“In 2018, the same website ‘conferred’ one Dr. Shuaib Idris Mohammed of Edo State with the ‘World Champion in Agricultural Extension (Credit Facilities)’ award ‘out of 91 countries.’

“That’s the exact language used for Dr. Nura; the same suspiciously atrocious grammar. The ‘contenders’ for the ‘awards’ are always in the thousands—and from more than 90 countries in the world.

“But nothing in Nura’s scholarly record—and those of others who have been made ‘fathers’ of whole disciplinary specialties by the fraudulent site—suggests that he is anywhere close to the pinnacle of his career.

“The saddest thing about this fraud, for me, is that news organisations like the NTA, Voice of Nigeria, Sahara Reporters, and even well-known people like @ShehuSani and @KadariaAhmed fell for it. It’s an easily detectable scam, in my opinion. Nigerians have to be the world’s greatest suckers for cheap scams!” he wrote.

While going through the website, it was also observed that applications for the World Championship is through a resume, the applicant’s photograph, among other requirements to be sent to a Google mail.

According to the website, after a “rigorous” review of applications, candidates would be informed of outcomes with certificates.

Several Nigerian winners were listed with their profiles on the website.

It was also observed that each time the website announced anyone a winner of its award, it inserted the person’s profile among ‘10 famous Nigerians changing the world’. The list included former President Olusegun Obasanjo, Chinamanda Adichie, Mikel Obi, Mo Abudu, among others.

It, however, called the Nigerians and Kenyans in one instance of celebrating one of its awardees, Dr Itodo Grace Eleojo, whom it said was in the same category with Albert Einstein and Michael Faraday.

Special Assistant to the President on Digital/New Media, Tolu Ogunlesi, described the site as an “award mill.”

Ogunlesi pointed out that the International Agency for Standards and Ratings, the awarding organisation, also gave out several fake awards and honorary degrees.

“I think there are some basic rules for when you hear news like this. Always ask questions. Always use Google. Does the award even exist? Who’s the awarding institution? Who are previous winners? What credible news media have carried the news? If it’s only Naija blogs – Red flag,” he tweeted.

Spokesperson for the University of Maiduguri, Mohammed Ahmed, said Nura had yet to officially inform the school about the award.

“He has not formally come to tell us this is what it is,” he said.

Nura could not be reached for comment as of the time of filing this report.

Enquiries sent to plojindexing@gmail.com, the only email on the organisation website, had yet to be replied to as of press time on Monday.