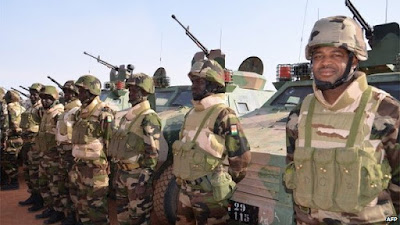 Military authorities secretly buried more than 1,000 soldiers, who were killed in the battle with insurgents, in a bid create the impression that the counter-insurgency had been won, The Wall Street Journal, has reported.

The newspaper reported that military sources said the number of soldiers buried in that manner could be higher than 1,000.

But the Defence Headquarters has dismissed the report, saying it had no graveyards where soldiers were secretly buried. It said that fallen heroes were given full military burial according to global best practices.

However, the paper insisted that on the eve of President Muhammadu Buhari’s visit to Borno State in November, army commanders secretly moved corpses of soldiers from a morgue to unmarked graves at Maimalari.


Quoting soldiers, diplomats and senior government officials, the newspaper stated that the corpses were covertly transported in a truck from a mortuary in the dead of the night and buried in “trenches dug by infantrymen or local villagers paid a few dollars per shift.”

“Several of my comrades were buried in unmarked graves at night,” said a soldier from the Maimalari barracks, where more than 1,000 soldiers are based.

“They are dying and being deleted from history,” the soldier added.

The newspaper quoted a senior government official as saying that the secret gravesite at Maimalari was not the only one in Nigeria’s troubled North-East.

It stated that although Buhari had “repeatedly claimed his army has won, the reality is that Africa’s largest land force—a US counterterrorism ally—is struggling against an insurgency that first flared a decade ago and is now rejuvenated by the Islamic State and the return of fighters from Libya, Syria and Iraq.

“The insurgents now control hundreds of square miles of territory across four countries around the Lake Chad basin, a crossroads of Africa where the US, the UK and French military have bases or provide special-forces training. On Sunday, gunmen attacked a funeral on the outskirts of Maiduguri, killing at least 65 people, according to government officials.”

According to the report, Nigeria’s government last summer stopped reporting the deaths of soldiers in its fight with Boko Haram insurgents and a splinter group that calls itself Islamic State West Africa Province, or ISWAP.

The Wall Street Journal quoting military officials stated, “The sprawling secret graveyard in Maiduguri and an official cemetery at the base, the operational command for the north-eastern front in Borno State, now hold the bodies of at least 1,000 soldiers killed since the terror groups began an offensive last summer.”

The Wall Street Journal reported that a 50-year-old farmer, Sarah James, said the secret cemetery at the Maimalari barracks grew as the military had expanded the site into neighbouring fields.

“The farmland has been fenced off so they can bury the forces,” she said.

James said she and her colleagues gave up land they had farmed for years to make way for the expansion of the base’s cemetery.

The newspaper said Nigeria’s military built a barrier to ward off what had been farmland on the northern edge of the base in Maiduguri.

The report stated, “Units that have suffered casualties and declining morale aren’t in a position to attack, and are instead defending poorly constructed bases in exposed areas against an increasingly well-equipped enemy.”

“There is a systemic misrepresentation of the war that is having severe tactical and operational consequences,” a former soldier, Chidi Nwaonu, was quoted to have said.

He said the bravery of troops was being undermined by poor decisions of senior commanders. “It’s part cock-up, part conspiracy,” he added.

After an attack by the insurgents on the army base in Metele in November, the newspaper quoted a soldier to have said, “See the weapons they bring here. These are not working. No less than 100-plus soldiers died here. Many are missing in action; they are nowhere to be found.”

It said that a journalist based in Abuja, Timothy Olanrewaju, said the military told him that his brother, a sergeant, was safely on deployment.

It added that Olanrewaju could not reach his brother, Sgt. Samuel Olanrewaju, for four months, but commanders repeatedly assured him that his brother was well, stationed in a sensitive combat zone.

According to the report, Olanrewaju learned of his brother’s fate when the Islamic State published a video that showed his execution. “I couldn’t believe my eyes,” he said.

“Why didn’t they tell me the truth?” he asked.

The newspaper stated, “The military’s secrecy about casualties is so widespread it is unclear whether Nigeria’s political leaders are aware of the state of the conflict. We could see the headlamps and the torches of the engineering division digging the graves,” said a soldier.

Although Buhari had said that insurgents had been defeated, the Chief of Army Staff, Lt. Gen. Tukur Buratai, in June said soldiers’ lack of commitment was affecting the war against insurgency.

The Presidency directed newsmen to the Defence Headquarters to address the issue, adding that it was a military matter.

The Senior Special Assistant to the President on Media and Publicity, Mr Garba Shehu, stated, “On the issue of (1,000) soldiers, talk to the military. Talk to the Defence Headquarters about this.”

In its reaction, the Defence Headquarters said it had no graveyards where soldiers were secretly buried, noting that fallen heroes were honoured with gun salutes, solemn prayers, among others.

The military denied the allegation in a release by the acting Director, Defence Information, Col. Onyema Nwachukwu, on Thursday, saying that soldiers who paid the supreme price were given their “last respects in a befitting military funeral ceremony of international standard.”

Nwachukwu noted that the Maimalari cemetery, described in the publication, was not secretbut the military officially-designated cemetery for soldiers in the North-East theatre, with a “cenotaph erected in honour of our fallen heroes.”

Nwachukwu said, “The Defence Headquarters has noted with dismay an article purporting that the Nigerian military maintains secret graveyards in the North-East theatre of operation. The armed forces of Nigeria have a rich and solemn tradition for the interment of our fallen heroes. Therefore, it must be unambiguously clarified that the Armed Forces do not indulge in secret burials, as it is sacrilegious and a profanity to the extant ethos and traditions of the Nigerian military.

“In tandem with the traditions of the Armed Forces, fallen heroes are duly honoured and paid the last respects in befitting military funerals of international standard, featuring funeral parade, grave site oration, solemn prayers for the repose of departed souls by Islamic and Christian clerics, as well as gun salutes, aside from other military funeral rites.

“The cemetery described in the publication, which is situated in Maimalari military cantonment is an officially designated military cemetery for the Armed Forces of Nigeria in the North-East theatre, with a cenotaph erected in honour of our fallen heroes. The official cemetery has played host to several national and international dignitaries, where wreaths were laid in honour of the fallen heroes. It is therefore a far cry from the sacrilegious impression being painted by the Wall Street Journal.”

Atiku calls for commission of inquiry

But the presidential candidate of the Peoples Democratic Party, Atiku Abubakar, called on Buhari to constitute a judicial commission of inquiry headed by a non-partisan and reputable jurist, to unravel the authenticity of the report.

Atiku, in a statement, said if the report was true, he received it with a sense of heartbreak and shock.

According to him, it is heart-breaking for the families and friends of those soldiers who, if the report was true, had lost their loved ones, without being allowed to bury them or even to have any sense of closure as regards their fate.

He said, “I shudder to think that the cover-up of such an event of epic proportions can be true. The men and women of our armed forces are our first, second and last defence against our domestic and foreign enemies and should be treated with love, respect, dignity and appreciation for the invaluable service they render to Nigeria.”

He added. “To ensure that we get to the bottom of this matter, I urge that a Judicial Commission of Inquiry headed by a non-partisan and reputable jurist, be inaugurated to investigate the findings of the Wall Street Journal.”