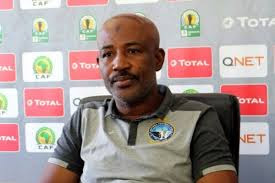 Usman Abdallah, the Head Coach of Enyimba International Football Club, says he has confidence in the ability of his team to recover from their 2019/2020 CAF Champions League opening game loss.

The two-times African champions lost 0-1 to hosts Rahimo FC of Burkina Faso in Ouagadougou in their First Preliminary Round first leg clash on Saturday.

The News Agency of Nigeria (NAN) reports that Issou Zonon scored the only goal in the match’s second half to underline their early dominance and secure a vital win.

The result means the Aba giants need a 2-0 win at least to advance to the second preliminary round in September.


Abdallah told NAN however that the People’s Elephant are still very much in contention to progress to the next phase since they suffered only a slim defeat.

“It was not a good result for us, but at the same time we are not in a very difficult situation because it could have been worse if we had lost by two or three goals.

“This was just our first game in the campaign and sometimes results can go this way, but I can assure that the second leg in Aba will be a different ball game,” he said.

Abdallah noted however that the Burkinabe side have going for them their youthfulness and agility.

“But with the first-hand knowledge we acquired from Saturday’s tie, it will now be ‘easier’ to plot their downfall in the second-leg.

“They have a young team with very good mobility and good techniques and they are very fit.

“The goal they scored was a deflection and could have been avoidable, but now we have to go back to Aba and cancel the goal and also get another one more goal to seal the deal.

“This is definitely not beyond our reach, given our pedigree. So, I am confident that we will have no problem advancing,” the coach said.

NAN reports that the second leg tie will be played at the Enyimba International Stadium in Aba on Aug. 23.