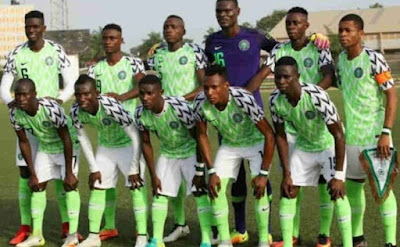 Team Nigeria got some gold medals yesterday to maintain its second position on the table, however, players and officials of the Flying Eagles were forced to early bed yesterday in Rabat, after they lost 0-2 to Burkina Faso in the gold match at the Boubker Aamar Stadium.

The Coach Paul Aigbogun-led team, which defeated Mali in the semifinal, went into yesterday’s match assuring Nigerians that they will conquer Burkina Faso.

The defeat means Nigeria’s search for the gold medal in the men’s football events in the African Games is further extended to Accra 2023, if the team qualifies.

Nigeria last won the football gold medal on home soil in 1973. Forty six years on, Nigeria had to settle for the silver medal for the third time after those of Algiers 1978 and Cameroon at Abuja 2003.


But somehow, if considered a record, Nigeria is the only country to have won gold, silver and bronze medals in the event. The silver medals are those of Algiers 1978, Abuja 2003 and now Rabat 2019.

Nigeria won the bronze medal at Cairo 1991 and Brazzaville 2015. Burkina Faso launched themselves into the path of gold when Cheick Djibrik Ouattara found the net in the 24th minute.

The ovation that greeted the goal had hardly died when Ismaila Ouedraogo doubled the lead six minutes later. With two goals up at half time, the Burkinabes fortified their defence in the second half to the frustration Flying Eagles.

Their female counterparts, Falconets, had defeated Cameroon on penalties to win the gold medal on Thursday.

Meanwhile, Nigeria’s Rowing, Canoeing and Sailing team became the cynosure of all eyes yesterday following the superlative performance by the athletes.

The nation’s Canoeing athlete, Ayomide Bello Ayomide Bello won the C1 200m gold at the Mohammed Ben Abdellah Dam in the early hours of yesterday to send Team Nigeria into jubilation before Foloki Goodness added another gold medal in the C2 200m.

The gold medalists have qualified for the Rowing, Canoeing and Sailing event at Tokyo 2020 Olympic Games.