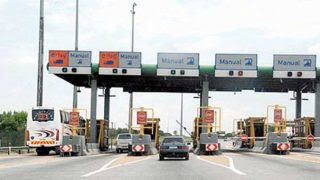 Nigerians, as well as foreigners, were deprived entry into the country through the Seme border, Lagos, for the better part of Wednesday, following information that the border had been shut.

Many Nigerians were forced to return to the host country when all entireties on security agents at the border failed.

However, the Nigeria Customs Service said that the border was not shut. Rather, it explained that movement of illegal migrants in and out of the country was only restricted. The checks according to the Customs, was being carried out by operatives of the newly launched joint border security exercise code-named EX-SWIFT RESPONSE, as part of measures to secure the nation’s land and maritime borders, against influx of illegal migrants and other acts of criminalities.


The joint exercise, involves the Nigerian Customs Service, NCS and the Nigerian Immigration Service, NIS in collaboration with the Armed Forces of Nigeria as well as the Nigeria Police Force and other security and intelligence agencies. The exercise which began on Tuesday, August 20, 2019, is expected to end by September 15, 2019.

The Nigeria Customs Service Public Relations Officer, Joseph Attach, who disclosed this in a statement issued yesterday in Lagos, informed that the joint exercise was being coordinated by the Office of the National Security Adviser, ONSA, adding that it would take place in four geopolitical zones: South-South, South-West, North-Central and North-West.

He explained that the exercise among other aims was expected to promote “interagency cooperation and increase preparedness to address trans-border security challenges such as terrorism, armed banditry, smuggling, proliferation of small arms and light weapons, among others.

“The exercise will also involve the movement of personnel, vehicles and equipment within the affected parts of the country. Therefore, we call on members of the public not to panic and should continue to engage in their normal duties. The overall objective is to ensure a peaceful and secured country in the interest of our National Security.

Some stranded Nigerians at the Benin Republic’s end of the border, who spoke with newsmen alleged that they were harassed by the security agents. One of them who spoke on the condition of anonymity, said, “ I went for a workshop at the Institute of Mathematical Science and Physics, in Port Novo, Benin Republic, sponsored by World Bank. We were 45 Nigerian participants.

The workshop started on August 14 and ended yesterday, (Tuesday) , August 20, 2019, about 6pm. We all came to the border today, (yesterday), only to be told that the border had been shut since the previous day. I went with my Nigerian passport which was stamped and with my yellow card, which I showed to some Immigration officers.

They said there was nothing they could do that the directive was from Abuja. My supervisor even went to the Comptroller to explain that we had the necessary document but he was told same thing. Some of us paid N1,000 to commercial motorcyclists who took us through illegal routes” Others, particularly traders, lamented that they were forced to return to hotels in Benin Republic, with their goods, adding that the extra cost would affect sales. Some soldiers marched us back with koboko (horse whips)