#BBNaija: Housemates angry as Khafi and Gedoni make love while they watch 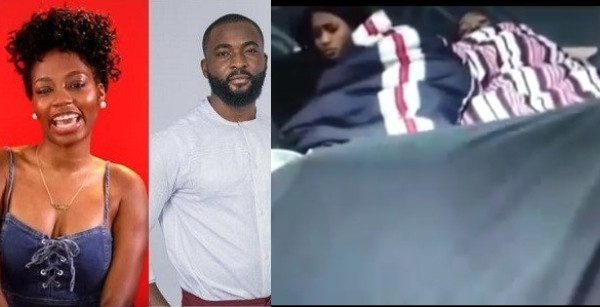 Big Brother Naija housemates, Khafi and Gedoni were caught making love again on Wednesday night. This time, the light was still on while some housemates were awake.

The footage, showed the lovebirds moving their bodies in ecstasy under the sheets, while Esther and Frodd watch. Esther couldn’t hide her disappointment as she shook her head in disapproval with a look of ‘what’s going on here?’

The housemates’ sexual activities went on break for some time, with Khafi feeling insecure that Gedoni had fallen in love with another housemate, Venita.

They (Khafi and Gedoni) both reconciled on Monday with Venita clearing the air on her relationship with Gedoni.

Gedoni and Khafi first were first captured in a s.e.x act in the house on Saturday, July 20th then again on Tuesday, July 23, and again on Monday, July 29.

Khafi, full name Khafi Kareem, is a policewoman and an Ekiti native based in London. Ekpata Gedoni is a fashion entrepreneur from Cross River. He is 31-years old.

Their latest sex act is coming few days after her (Khafi) superiors declared she could face disciplinary panel for participating in the reality show without lawful permission, and for engaging in a sexual act.