BBNaija: Esther kisses Frodd after spending days in the house 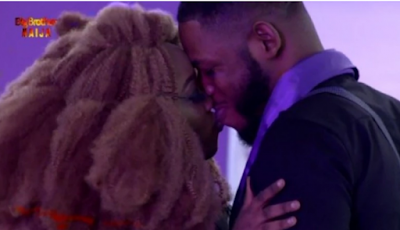 Nigerians on social media have continued to react over the kiss Esther gave to Frodd in the ongoing BBNaija reality TV show.

The kiss came after housemates showcased their creative abilities to Biggie during the Darling hairstyle challenge, which was won by Venita and Sir Dee.

Recall that Esther was asked by Ebuka what changed in her relationship with Frodd and she replied saying, “I got to know him.” Again, she was asked if the feelings Frodd has for her is mutual and she replied in the affirmative.

Esther noted that she only has mutual feelings for Frodd because they are both in a confined space and this has left her no choice.


Meanwhile, Mercy and Diane, the other members of the Power Puff Girls, which Esther belongs to, have questioned the sudden change in Esther’s attitude towards Frodd.

Discussing with Diane and Elozonam, Mercy said, “She’s acting, just to be seen around him always.”

On her part, Diane revealed that she was surprised to see Esther move to Frodd quickly and has recently been hanging around him frequently.