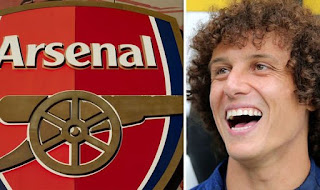 Chelsea football club have announced the complete transfer of David Luiz to the north-London club, Arsenal.

This was confirmed in a statement released by the club on Thursday evening.

In a farewell message to the Brazilian, Chelsea wished him good luck and thanked him for his services.

The statement reads: “We have reached an agreement for the permanent transfer of David Luiz to Arsenal.

“Thank you for your service and good luck, David.”


We have reached an agreement for the permanent transfer of David Luiz to Arsenal.

Arsenal have also confirmed the arrival of the versatile defender.

A statement from the club’s website reads: “Welcome to The Arsenal, David Luiz.”

The move sees Luiz reunite with Unai Emery, with whom he worked briefly at Paris Saint-Germain before his return to Stamford Bridge for a second spell in 2016.

Unai Emery said: “David has huge experience and I look forward to working with him again. He is a well-known player and adds to our defensive strength.”