Army, police at war again over death of three in Lagos 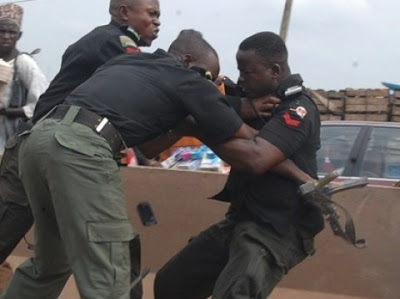 Just a week after some soldiers shot dead three police officers in Ibi, Taraba State, some military personnel attached to the 81 Division of the Nigerian Army have killed three residents of Isheri Olofin, a boundary community between Lagos and Ogun states.

Two of the deceased were identified as Damilare Adelani and one Tayese.

According to reports, the trouble started on Monday when the community staged the ‘Isheri Day’, an annual carnival.

The soldiers were reported to have accompanied one Tiri, an indigene of the community laying claim to the Kara Market, to the festival.


Tiri was said to have been engaged in a supremacy battle with another powerful family in the community over the control of the market, which is a settlement in Ogun State along the Lagos-Ibadan Expressway, just before the Berger bus stop in Lagos State.

Some of the people at the festival reportedly resisted the soldiers, who attempted to make way for Tiri to pass in the midst of the crowd.

The issue was said to have degenerated to a free-for-all, as the soldiers, who were allegedly trying to protect their principal, opened fire on the residents.

While two persons were said to have died on the spot, another resident, identified as Adelani, who sustained gunshot injuries in the leg, was rushed to hospital.

The soldiers were reported to have mounted a motorcycle and fled the scene.