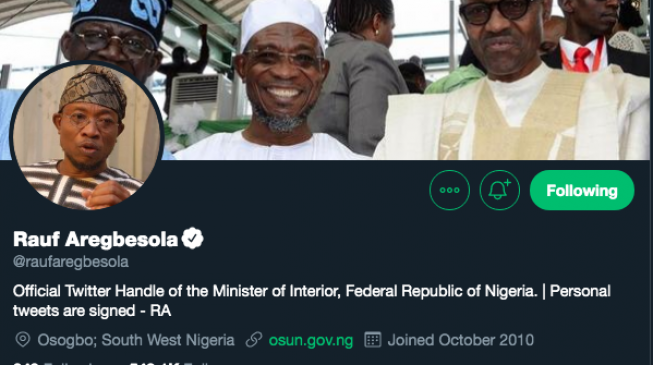 Rauf Aregbesola, former Osun state governor, updated his Twitter profile with a new position about 20 minutes after his inauguration as minister of interior on Tuesday.

President Muhammadu Buhari assigned portfolios and inaugurated his cabinet in a ceremony that took place at the presidential villa in Abuja.

As minister of interior, Aregbeshola will be saddled with overseeing internal security and other activities that come under the scope of the federal ministry of interiors which include, granting citizenship, consular and immigration services, management of national emergencies, reformation and re-integration of inmates, and co-ordination of national and independence day celebrations.

At the time of filing this report, Aregbeshola was the only minister to have reflected his new status on his social media handle.

Responding to questions during his confirmation hearing at the senate, the minister said he would impose heavy taxes on high net-worth individuals.

“We have left the rich men in Nigeria without discharging their responsibility to the citizens, particularly on taxation,” he had said.

“So, I am going to pioneer privilege taxes for those who have huge resources or wealth from which Nigerians must tap. If I go into this, there might be some ill feelings in some quarters, so I won’t go deep into that. I will recommend serious taxation for wealthy people in Nigeria.”

Aregbeshola served an eight-year tenure as the governor of Osun state and handed over to Adegboyega Oyetola.