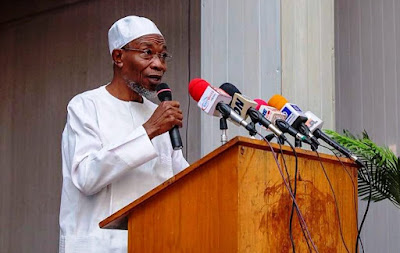 A former governor of Osun, Rauf Aregbesola, has hinged the leadership woes in Nigeria on failure at the family level.

Aregbesola spoke on Saturday at the seventh edition of the Youth Leadership Summit organised by the students executives of the University of Ilorin.

The theme of the summit was ” Team Struggle to Attain Justice.”

He said the country was being misled by misguided, badly groomed and disoriented people due to leadership collapse at the family level.


Aregbesola described leadership at the family level as the most strategic.

According to him, if the head of the nuclear family discharges his responsibility, the country will probably not have many problems.

He described leadership as the ability to mobilise, motivate and encourage people to do what was good and right.

Aregbesola also enjoined Nigerians to be fair in all their dealings.

In his address of welcome, the Vice-Chancellor of the university, Prof. Sulyman Abdulkareem, said the summit was to train and widen the horizon of talented, energetic and entrepreneurial youths to take over from the older generations.

Abdulkareem stated that at the growth rate of 3.2 percent, Nigeria’s population was projected to hit 289 million by 2050, with more than 60 percent of this expected to be youths.

He said the country faces a dire future without genuine integrated economic policies that would empower young people and initiate sustained jobs creation plan in preparation for the demographic overshoot.

The vice-chancellor said that the projected population growth could either pose a major challenge for Nigeria or a major opportunity.

He said the nation should be willing to unlock this demographic dividend by empowering the youths to play constructive, unifying and innovative roles in the country’s development process.

Abdulkareem, however, warned the youths against violence in the quest to fight oppression, but focus on the weaponry of the mind which include education.

He also advised them to shun frivolities, saying the business of leadership was serious and required adequate attention to matters of the state.

A journal, “The Erudite,” was launched in honour of Aregbesola at the occasion and some personalities, including the Ooni of Ife, Oba Adeyeye Ogunwusi and a Health Specialist with the World Bank, Dr Michael Olugbile, were honoured at the summit.