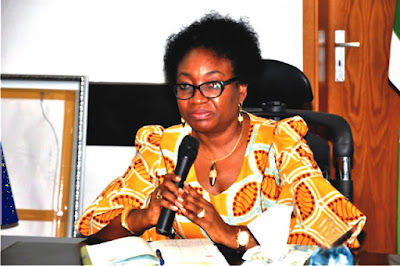 As the Economic and Financial Crimes Commission (EFCC) steps up investigation into a N3 billion contract scam, the Head of the Civil Service of the Federation, Mrs. Winifred Ekanem Oyo-Ita, has pleaded that the case against her be stepped down.

The number one civil servant is begging that she should be allowed to “retire honourably.”

Although she admitted introducing some people to some Permanent Secretaries for assistance, she said she was doing so “without realizing the implication.”


She said she does not own proxy companies under any guise and has no many upscale assets in Abuja.

She said although she collected Duty Tour Allowance (DTA) without traveling, the indulgence was not a regular occurrence.

She also alleged that the EFCC had planned to arraign her on August 19 but she had to remain in a hospital to take care of her health.

Her plea came against the filling of witness forms by some Permanent Secretaries and Directors of Finance and Administration in order to testify against some contracts when the formal trial of some suspects begins.

Detectives have also discovered that the Project Accountant, in whose account N600 million was found, is on Grade Level 12.

Oyo-Ita, however, said the Accountant in the Office of the Head of the Civil Service of the Federation (OHCSF) was not her aide but he reports to a Director of Finance and Administration who also reports to a Permanent Secretary before the Head of Service comes into the picture.

The foregoing snippets are contained in Oyo-Ita’s plea to those she is begging to intercede on her behalf before President Muhammadu Buhari.

A part of the snippets saw her saying: “Please, please, please, have mercy on me. I am begging for mercy that this case against me should be stepped down and I should be allowed to retire honourably.

“I do not own proxy companies. Several people came to me to introduce them to Permanent Secretaries. I have been doing this without realising the implication.”

On DTA, two top shots who are mediating on her behalf said she confessed to have collected these estacodes without traveling only “a few times.”

One of the sources, a former bureaucrat, quoted her as saying: “Due to work pressure, I am not able to travel after collecting DTA or estacodes.”

The source added: “She wants soft-landing from the Presidency because some of the contracts under investigation predated her appointment as the Head of Service. They were awarded between 2013 and 2014. “Her greatest fears border on alleged moves by the EFCC to put her on trial alongside a former minister. “She said there was an initial plan to arraign her in court on August 19 but for providence that she was in the hospital for medical treatment.”

A second source, who is one of the strong supporters of the President, said: “She evoked much emotion when she was begging for mercy. “Apart from reliving the past, especially PTF days with President Muhammadu Buhari, she said she has been ‘absolutely loyal’ to this administration.

“She also said the Project Accountant is not her aide at all despite the fact that he is a staff in the Office of the Head of the Civil Service of the Federation.

“Her argument is that the Project Accountant with N600 million in his account reports to a Director of Finance and Administration who also reports to a Permanent Secretary before the Head of Service is in the picture.

“We have done our best to lay all the cards on the table before the powers that be. It is left for the President to determine her fate in the light of the investigation report of the anti-graft commission and her defence.”

No record of her resignation, says Presidency

On the circumstances surrounding her resumption yesterday, there were rumours that the Presidency might have rejected her plans to either resign or retire. It was learnt that the Head of Service confided in the staff in her office that the Presidency directed her to go ahead with her work pending the conclusion of investigation.

The Senior Special Assistant to the President on Media and Publicity, Mallam Garba Shehu, said last night: “We are not aware of any letter of resignation. There is no record of it in the registry. So, questions pertaining to it ought not to arise.”

At press time, there were indications that the anti-graft agency had uncovered that the OHCSF officer with N600 million in his account is on Grade Level 12.

A reliable source said: “So far, we have discovered that he is a GL 12 officer. He is answering questions on how he came about such a huge amount in his account.

“Officially, the amount allowed in any project account at any time is between N10 million and N15 million. The ongoing investigation might reveal the real purpose for keeping such a huge cash.

“We have various bends to the investigation and some Permanent Secretaries and Directors of Finance and Administration have filled the witness form to testify on some contracts when a formal trial of suspects begins.”

Responding to a question, the source added: “We may still invite Oyo-Ita for interrogation. The amount involved is huge.”