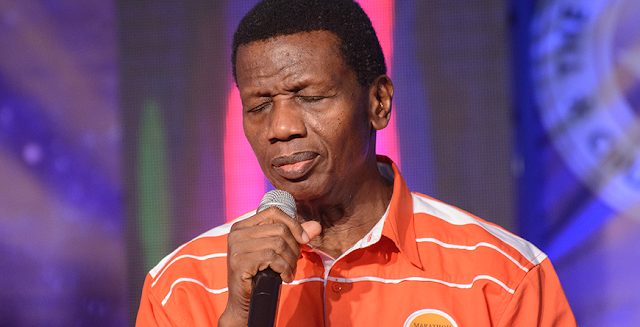 The General Overseer of the Redeemed Christian Church of God Worldwide, Pastor Enoch Adeboye, has called for prayers following the kidnap of five persons suspected to be pastors of the church .

The pastors were travelling from the Eastern part of the country on Thursday to attend a ministers’ conference held at the RCCG Camp on the Lagos-Ibadan Expressway, preparatory to the church’s Annual Holy Ghost Convention which starts on Monday.

The kidnappers ambushed the vehicle they were travelling in along Ogbere in the Ijebu-East Local Government Area of Ogun State and whisked them away into the bush.

Speaking on the abduction at the conference on Friday, Adeboye called for prayers for the kidnapped victims to regain their freedom.


He asked the National Prayer Coordinator of the church, Pastor Peter Olawale, to lead the congregation in prayers for God to rescue them from the kidnappers’ den.

Olawale, who is also the Special Assistant to the GO on Prayers, thereafter led the worshippers in fervent prayers.

The Head, Media and Public Relations, RCCG, Pastor Olaitan Olubiyi, confirmed the incident to newsmen on the telephone and said all hands were on deck to rescue the victims.

He said, “The whole thing broke out this morning when the General Overseer was speaking to us at the ministers’ conference.

“As far as the church is concerned, we are still trying to get as much information as possible about the incident. We are trying to put all hands on deck to ensure that the victims return home safely.”

Asked if the kidnappers had contacted the church, Olubiyi answered in the negative.

“We don’t know whether they have contacted the families, but our concern is their safe return and we trust that God will do it,” he added.

However, during the evening session of the Ministers’ Conference, pastor Adeboye said investigation revealed that only one of the five people kidnapped is an RCCG pastor, noting that the other four are not RCCG members.

“But we are praying for them that they will all be released,” he added.

The GO said that not long after his statement in the morning, he started getting calls from the United Kingdom about the abduction.

Meanwhile, the Ogun State Police Command says it has launched an aerial surveillance as part of the efforts to rescue the five abducted persons.

The police said operatives were closing in on the kidnappers and assured the public that the victims would soon be rescued.

According to the police, the abductors emerged from the forest and forcefully stopped a commercial vehicle with the number plate KW 230 XA belonging to Abia Line transport company and took the passengers into the forest.

In a statement, the Public Relations Officer of the Ogun State Police Command, Mr Abimbola Oyeyemi, said the Commissioner of Police, Bashir Makama, was leading the rescue team.

Oyeyemi said, “On August 1, 2019, at about 3.30pm, the Ogun State Police Command received information that a commercial vehicle with registration number KW 230 XA belonging to Abia Line transport company was coming from the Eastern part of the country and heading towards Lagos.

“On getting to the J3 area of Ogbere, some hoodlums numbering about 10 suddenly came out of the forest and forcefully stopped the vehicle.”

The PPRO said the hoodlums’ hideout had already been located but that operatives were being tactical in order not to jeopardise the victims’ lives.

“With the operation going on presently, we are rest assured that the victims will soon regain their freedom and the hoodlums will definitively be brought to book,” he said.

Oyeyemi said the helicopter given to the command by the Force headquarters would assist in the rescue operation.

He said, “We don’t know whether they are pastors or not. What we know is that they were coming from the East. On getting to the J3 area, some hoodlums came out from the bush, stopped their vehicle and abducted five of them – a woman and four men.”