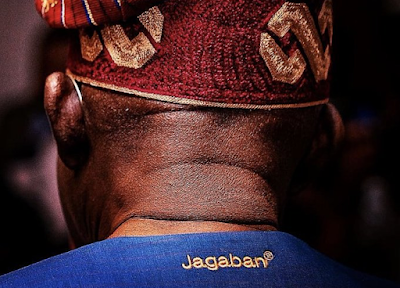 Bola Tinubu, national chairman of the All Progressives Congress (APC), has been lavished with compliments after a photo of him wearing an attire bearing the word ‘Jagaban’, surfaced on social media.

In the photo shared on Twitter by Ademola Olaniran, a photographer, the former governor of Lagos state is seen rocking a blue outfit with ‘Jagaban’ inscribed on the back and a cap to match.

@ademolaniran Whats aBRAND?
How do you Own a Name&Exude the meaning to its entirety?
The word 'Jagaban' means'leader of warriors'As it is there is no one more JAGABAN than the JAGABAN of Borgu.
TheDesigner of the Outfit then puts the icing on the cake with that trademark symbol ® pic.twitter.com/V8HrCh7gV7
— Ademola Olaniran (@ademolaniran1) August 27, 2019

‘Jagaban’ is a title conferred on the politician by Halliru Dantoro, the late emir of Borgu and one of the titans of the “second republic” politics.

According to Dantoro, the title means “leader of warriors”.

The title was also birthed from the phrase “Ja a gabar Borgu”, which means a leader of Borgu city, and was given to the politician for his “unconditional service and time-tested leadership.”

The photo has since begun to gain some accolades among Tinubu’s fans and supporters on Twitter.

God,i know you've blessed this man,i want to wish and pray for long life and good health to enjoy the benefits of living long. He's very dear to most of us here. I don't care about those that doesn't like his ideas anyway...Omo olódó dė!
— Oladele Maxwell Segun(ÌWÀLEWÀ) (@MaxwellDele) August 29, 2019