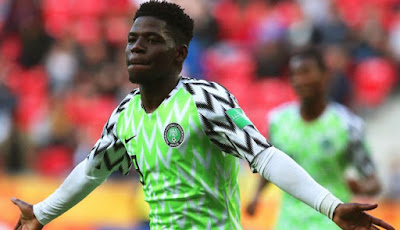 Premier League club Watford have announced the arrival of Nigeria’s Tom Dele-Bashiru on a six-year deal.

Dele-Bashiru left Manchester City following the expiry of his contract and will now continue his career at Vicarage Road until 2024.

The 19-year-old midfielder was part of the Nigeria U20 team at the 2019 Fifa U20 World Cup in Poland and he scored a goal in three games before their exit in the knockout round.


The midfielder will join compatriot Isaac Success at Vicarage Road as he seeks regular playing time in the 2019-20 campaign.

During his spell at Manchester City, Dele-Bashiru featured for the club’s youth team and made his professional debut as a 91st-minute substitute during their League Cup quarter-final match against Leicester City in December 2017.