WARNING: Reasons why you may need to stop ponmo! 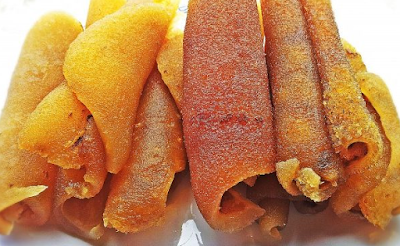 Roasted animal skin, otherwise known as ponmo, is one of the favourite meat parts that Nigerians love to eat.

However, the National Agency for Food and Drug Administration and Control warns the general public to be careful of the consumption of ponmo!

The Lagos State Government is currently waging war against what it describes as ‘toxic ponmo,’ which it says is being sold in the state.

1. Most of these animal hides are meant for industrial use.

2. Some of the animal hides are sometimes pre-treated with industrial chemicals, which are not of food grade and are toxic and injurious to human health.

3. Some companies legally import hides from countries such as Lebanon and Turkey, while majority of the product are smuggled into the country through the porous borders.

4. The imported animal hides are meant for industrial use by leather industries for the manufacturing of items such as shoes, bags, belts and others.

5. Health hazards inherent in the consumption of such animal hides include risk of liver, kidney and heart damage, increased risk of Aplastic anaemia, central nervous system toxicity, cancer and more.

6. Livestock farmers are advised to note that industrial animal hides could not be used in the manufacture of animal feed.

7. Associated chemicals are generally stored in the tissues of animals that are fed with feed made with industrial animal hides and will eventually end up in humans when consumed, with the attendant effects.