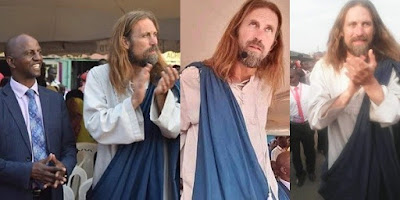 If you did not go to church last weekend, you surely missed out on Jesus Christ’s anticipated “Second Coming.” A Jesus Christ literally visited a church over the weekend in Kenya.


My favourite scammer this month is this fella that convinced some people he's Jesus.
💀🤣💀 pic.twitter.com/HErd6DIBmz
— Ottilia Anna MaSibanda (@MaS1banda) July 28, 2019


A Kenyan Pastor invited a white Jesus impersonator to his church, and he rode across the road waving people, who were cheering him on. pic.twitter.com/4lhgJhGq5H
— Africa Facts Zone (@AfricaFactsZone) July 28, 2019

Two pastors, one from Kenya and the other from South Africa allegedly claimed to have found Jesus and are presenting the man to their congregation as the son of God.

Images of the Caucasian male whom they are calling 'jesus' were captured while he was speaking to a group of people in what appears to be a church, and the pictures are now making waves on the internet and questions are being asked.

According to Twitter user, @Desaylor1, on one hand, a yet-to-be identified Kenyan pastor had the 'jesus' dressed as the biblical version of Christ and had him speaking to his congregation after claiming to have found 'Jesus' on the streets of Kenya.

Another Twitter user, @Kennytexxxkkk shared photos of the same 'jesus' on the other hand, being introduced by a South African pastor to his members.

Both pastors allegedly told their congregants that 'jesus' had returned and lucky for them, He landed in Africa first.


African pastor said he invited 'Jesus' from heaven to come preach in his church
A post shared by MORE JUICY NEWS B4 D LAST POST (@famousblogng) on Jul 28, 2019 at 8:01am PDT


A Kenyan pastor claims he has found Jesus Christ walking on the streets of Kenya. Took the whiteman to his church, gave him a warm welcome and now his church followers are happy that Jesus has finally come back!